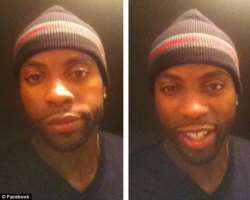 Reports say that a former basketballer with the Nigerian national basketball team, D'Tigers, Chinedu Onyeku, was shot dead in a failed burglary in that happened in Texas, USA on November 21, 2012.

The 29 years old former player was alleged to have broken into a residence on Rio Grande street, Plano with another person, who is now being tracked by the police. Chinedu was said to have been shot death by their alleged house burglary victim.

The Nigeria Basketball Federation (NBF) has released a statement on the death of Chinedu, who played a role in Nigeria's qualification in the 2012 London Olympics but didn't make the team.

"[His] passion for playing with D'Tigers was deep-seated and he will be greatly missed. The federation joins his family and team mates to mourn a departed son, father, husband and great patriot," part of the reads.

It is still unclear if his remains will be flown to Nigeria for burial.

Who Is Sexier: Omotola Or Genevieve

How I Cope With Rumours/Scandals Surrounding Uche- Husband Reacts