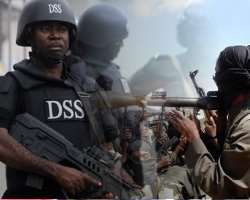 SAN FRANCISCO, November 29, (THEWILL) - Again, the Nigerian intelligence services have been given black eyes with the recent bombing of the military church in Jaji, Kaduna State and the invasion of the Special Anti-Robbery Squad (SARS) facility in Abuja by suspected Boko Haram elements.


The Nigerian Army had to face up to two blasts that hit a church inside its flagship military establishment – Armed Forces Command and Staff College, Jaji located in the restive Northern city of Kaduna in the character of the suicide attacks of the Boko Haram sect.


The Sunday twin explosions that rocked the St. Andrew Military Protestant Church led to the death of over 14 persons with 30 others sustaining varying degrees of injury.


Then, early Monday morning, the Boko Haram goons attacked the headquarters of SARS in Abuja in an attempt to free some of their members being held in custody. The gunmen were eventually repelled by the police who engaged the attackers in a prolonged battle that saw many residents of the area scampering for safety. Police later said it post two officers while some members of the gang were detained. However there are still controversies surrounding the exact number of detainers that escaped from the facility’s cells.


The attack, coming less than 24 hours after Boko Haram suicide bombers detonated explosives at a church in a major military training compound in Jaji, shows that there is real danger in the land. Only last week, the police had declared the leaders of the sect wanted, placing a total over N200 million bounty on them.


It is indeed a major blow to the security agencies in Nigeria that Boko Haram could break through the bastions of Jaji and the SARS headquarters in Abuja.


The general thinking as a result of the recent development is that if Boko Haram could easily break through the nation’s security network with such ease, there is ample reason to fear for the future of the country, as intelligence gathering appears to be at a zero level in Nigeria.


For a church inside the military barracks in Jaji to be so vulnerable underscores the porosity of the country’s security arrangement. It is as if Boko Haram upped the ante in bursting into the SARS headquarters.


That the army and the police were caught pants down, as it were, does not portray the country as being serious in the protection of lives and property as nobody can be said to be safe in the land.


According to Isotonu Achor, a security expert, “Nigeria is now seen as a sick joke all over the world in the matters of security. For Boko Haram to breach the intelligence cocoon of Jaji and the headquarters of SARS means that nowhere is sacred again.”


It is a shame that the government will always claim that it is on top of the matter only for a more insulting security breach to occur. The Boko Haram group has often targeted Churches in its bloody insurgency, as well as the police and other symbols of the establishment in Nigeria, yet the security operatives are forever found napping.


The National Emergency Management Agency (NEMA), like in all the cases, could only react after the damage had been done. The crucial point is that if the Nigerian security apparatus is properly organized, these attacks could always be nipped in the bud.


There is therefore an urgent need for the security forces in Nigeria to wake up to their duty of guarding the nation. Only last month, at least 10 people were killed and 145 wounded in a suicide church bombing and reprisal violence in Kaduna. Suicide bombings at three Churches in June that were claimed by Boko Haram sparked reprisal violence by Christian mobs who killed dozens of their Muslim neighbours, burning some of their victims’ bodies. Muslim groups also organised themselves into mobs and killed several Christians.


Before all these attacks and reprisals snowball into a national calamity there is the need for the Nigerian authorities to rise up to the duty of protecting the land. The Boko Haram insurgency in northern and central Nigeria is believed to have left over 3,000 people dead since 2009, including killings by the security forces. The time to act is now.