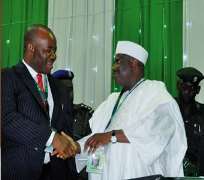 SAN FRANCISCO, November 28, (THEWILL) - Chief Godswill Akpabio, the Akwa Ibom State Governor, has called for economic integration among the Commonwealth African States saying that if European nations, in spite of their relative wealth and level of industrialization, could recognize the need for integration under the European Union and compete in the world market as an economic unit then “Africa has no reason to sit idle and think we can succeed in isolation.''

He said integration of the economies will help in creating job opportunities for the youths of not only the nation but the commonwealth countries as well.

The governor made the call during the official opening of Commonwealth Parliamentary Association’s Africa Youth Parliament at Ibom Hall, Uyo,

''African integration is no more a need; it is an obligation. Africa has crossed a lot of bridges, but we know we still have many rivers to cross. We are in a continent whose potential has been stymied by conflicts which were always not there. Our developmental pattern was affected when Europeans cut our continents into tiny bits and pieces to favour their self-interests.

''But we should take pride that our continent was worth being fought over. It means there is more to this blessed continent than we know about. Africa is a treasure island. But we have been embroiled in conflict because instead of looking at the silver lining in the clouds, we have been looking at the clouds themselves. But I see hope today in the faces of these youngsters. I see the silver lining in the clouds'', he reasoned.

Akpabio further reaffirmed his belief that the Commonwealth African States should take the initiative in African integration. In doing this, the political leaders can set an agenda for the reinvention of the continent and cause it to take its place in the comity of continents.

“We dare not forget that civilization began in Egypt in Africa and we can also bring civilization back to its roots – Africa,'' he stated matter-of-factly.

''We had universities like the University of Timbuktu in Africa before the advent of the Europeans. Some people have said that Europe underdeveloped Africa, but my belief is that Africa stopped believing in itself and its potential and cast itself on the waves of European thought and culture for too long. The relationship with Europe has been good, but the time has come for Africa to find its way out of the maze.''

One way of doing this he stated was for the implementation of a network of bilateral Free Trade Agreements (FTAs), and removal of political and social barrier that hinders FTA’s and instead Africa must study the economic integration models in other sub-regions and adapt best practices from these to design one for our continent which would work as well as provide gainful employment for the youths to stop the conflicts in our continent.

He commended the various associations for their great commitment to democracy and the Akwa Ibom State House of Assembly for taking the initiative in hosting this programme and the participants for being found worthy to represent their countries, saying ''I see in them the face of the new Africa and urge them to work with that consciousness and not let our continent down tomorrow''.

Also speaking at summit which has the theme; ''Economic Integration Amongst Commonwealth African States'' the Speaker of House of Representatives, Rt. Hon. Aminu Waziri Tambuwal noted that Akwa Ibom has made history by hosting the first CPA, observing that CPA has taken the initiative to pursue its ideals by bringing youths from Africa for weeklong deliberations.

Tambuwal said the future leaders have gathered to share experience, noting that the conference would build more synergies between the parliament and the people since people lack knowledge of the workings of parliamentary democracy in Africa.

The Speaker of Akwa Ibom House of Assembly, Elder Sam Ikon said the CPA offers the opportunity to set the pace and task the creativity and capabilities of the youths, expressing the hope that at the end of the conference, the youths would come out with meaningful and implementable options to better their future.