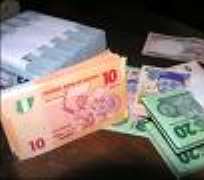 By Ayodele Aminu
The Central Bank of Nigeria (CBN) has declared its readiness to defend the value of the naira, warning that speculators in forex would have their fingers burnt.

THISDAY had reported yesterday that the Niger Delta crisis – which has dealt a heavy blow on Nigeria's oil income and crude oil production – was threatening to consume the country's foreign reserves.

The newspaper also reported that the reserves, which peaked at about $62 billion in 2008, could fall to below $40 billion soon if the CBN continued to draw from it to protect the naira by meeting foreign exchange demand at its weekly auctions.

However, the CBN governor, Mallam Sanusi Lamido Sanusi, has assured Nigerians that the apex bank is ready to defend the value of the national currency because it is in a good position to do so.

“We are in a very good position to meet the demand for forex, no doubt about that,” he told THISDAY. “Last month, for instance, we made $2 billion available at the Retail Dutch Auction System (RDAS) as we normally do, but the demand was only $1.4 billion. There is no reason to panic.”

According to the CBN governor, the bank has sufficient forex to meet “legitimate demand” as the outlook for the economy is looking promising again.

“Oil prices are relatively high now,” he said, “and there is increasing hope that the Niger Delta crisis will be resolved. This will push up production and improve the oil revenue. Indeed, we would be in a position to build up the reserves again. The message is simple: we have enough forex to defend the national currency.”

He said although the Niger Delta crisis would not be resolved in a day, "there is progress being made everyday and the spate of kidnappings has reduced significantly".

The CBN, he said, is convinced that what it currently offers at the twice-weekly auctions is sufficient to meet legitimate import needs based on a detailed analysis of RDAS demand over several years.

Sanusi said he is convinced that the current excess demand is driven by speculators and a few irresponsible banks.

"The CBN wants to make it clear that any bank that encourages panic buying or is found of breaking the rules will not only be suspended but will also be thrown out of the market," he warned, explaining that part of the measures taken recently was to ensure that no funds bought at RDAS are resold at the interbank market in order to curb the activities of some banks which bid high to resell at the interbank market.

To liberalise and deepen the market, Sanusi said the measures are aimed at encouraging banks to seek autonomous sources of forex for the interbank instead of the sole reliance on CBN as the supplier.

The efforts of the CBN in improving naira liquidity and bringing down interest rates are bound to put pressure on the exchange rate and can be seen in the recent mild depreciation of the naira but, according to Sanusi, "the naira is not a one-way bet - it will go up and down like any currency...Providing and stimulating growth through low rates will remain a cornerstone of the new CBN policy".

Expressing CBN's determination to revert overall slowdown of activities in the economy, he said the bank remains "very confident" in the economy and the naira.

"Speculators will lose heavily when, expectedly, the rates come down and stabilise," he warned.