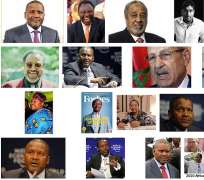 The final dead beds of the African elites hoping for miracle cure is anywhere but Africa. Other countries are now competing to alleviate their Voodoo curse. Africa is the only place that could bring them back from the Death Valley. Medical Business is slipping away from our medicine men. They need to form a union and lodge complaints in each African state that any billionaire taken overseas for his final breath must not be allowed back into Africa.

It is not that we do not have cottage hospitals in African countries or simple mortuaries that could accommodate their useless dead bodies but they seek salvation in the bodies of young and vibrant people, looking for more years in comfort with their loot. Many of them made a deal with the devil to get rich by any means but when the devil came calling for his dues, they ran out of Africa trying to defy Nemesis.

If these Africans warm bodies cannot do any good to their countries, many of us are puzzled about the benefit of their dead bodies. In the first place, whatever money they looted would be wasted because we cannot trace it back except by the mercy of the foreign governments; if they decided to hand it back. Of course, it takes a lot of work by lawyers, accountants and bank manager deducting expenses before it can be retrieved.

Mobutu, Haile Selassie, Abacha, Obiang and the other billionaires on the waiting list to die in the real Death Valley, must linger on in Africa and bring their loot home from foreign banks. Use it to establish what they denied the poor in their countries. They do not usually show up in the Forbes list of billionaires. Do not be fooled, there is a list of them here: http://www.forbes.com/sites/mfonobongnsehe/2011/11/08/who-were-africas-richest-dictators/#.

There used to be a time when you can go to any African country, work hard even in the mines of Equatorial Guinea and come home to retire. No more, the cost of living has been driven up by ostentation of billionaire fathers and millionaire children clubs that rendered our hard earned money useless, especially if you live around cities of Kenya and Nigeria. The two most capitalist countries bereft of fiscal common sense in Africa.

The only way one could live comfortably in some of these African countries is to amass as much money as the children of the billionaires in Millionaires clubs. You have to be a hustler for contracts because no decent job would pay you enough. Most of the jobs that pay anything decent were already shared by relatives and friends of the recruiters. Your best bet is to live at home as long as your money allows, return after more “buru”.

There was the case of one local billionaire with upstairs disease, a psychological disorder that was environmental and locally endemic with his class. He went to the Death Valley in California where they check his insurance to make sure he could pay for treatment. The relatives told them he had no insurance but were willing to pay whatever it cost to treat him. They started a barrage of test on him after they secured a heavy deposit. Ran up the deposit and asked for more.

Unfortunately, they told them his sickness could not be cured at the location and had to send him to a sister hospital to run up his money again. The family willing accepted. They found out it was not a physical brain disease as such but a “colo-mentality” that needed the incantation of a local Voodoo medicine man since the patient mumbled some curses put on him, deals he made to get rich and the repercussion of such wealth.

In short they were advised to take him back to the medicine man that understand his language and culture since none of the expert could translate his behavior or invocation into English or American culture. One of the relatives knew the medicine man that had told them he had to honor the deal he made with the devil. Yet he was taken to China where acupuncture was administered to the “were” that is sicko-in-the head patient.

The Chinese, aware of the traditional medicine of bare foot doctors on which their healthcare system is based, had to advise the family to fly his medicine man in from Burundi. He was lodged in the best hotel in China with hard currency to shop as he wanted. In his native language, the medicine man asked how many hospitals he built in Africa and how many women and children died of preventive parasitic and infectious diseases.

As soon as the sicko heard the voice of his medicine man, he opened his eyes and his family members jubilated thinking he was coming back alive to his old self. They could have waited a little more to celebrate because he immediately slumped and died. The medicine man blessed him and told the family members that was the deal he accepted from him. As it was written, so shall it come to pass. They family came back home and started spreading rumors that it was the curse of his enemies.

The amount of money spent trying to renounce the deal he made with the devil including the flight tickets of everyone involved, the air ambulance for only one man, not to mention hospital cost and specialists were enough to build one Neurological Specialist hospital, five Comprehensive Health centers and twenty Health clinics in his country. Enough to establish Health Technology training for 1000 children of traditional medicine men as Primary Care Health officers and nurses on a yearly basis.

Anyone that thinks that all those curses rained on looters' head by hungry bellies, pensioners dying on lines waiting for their money, students and workers protesting, the poor and wailing middle class asking for good roads, railway lines and simple clean water would not catch up with squanderers of African wealth, must think again. The day of hell is here on earth before they die.