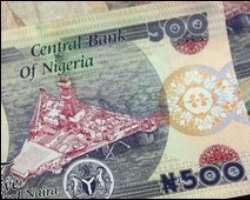 It is only one-thirtieth of the billions they want to track down.

Earlier this month, Nigeria's central bank was forced to bail out financial institutions that were close to collapse because of bad debts.

Nigeria's banking scandal is not linked to the global financial crisis, instead it is the result of corruption in the banking world here.

Business elite
Sixty eight of Nigeria's wealthiest people are already in police custody - just some of the debtors the central bank has accused of failing to pay back loans.

They belong to the elite of Nigeria's business world, but the police are refusing to name them.

It is not yet clear if they will all be charged, and if so, with what.

The central bank here has published a list of people that it says defaulted on big debts to the banks.

The police have been threatening to arrest them if they do not return the money.

Also in police custody are 16 bank executives - those who gave the loans in the first place.

They lost their jobs in a mass sacking by the central bank governor after he carried out an audit of the banks.

Damage control
The amounts of money involved in this scandal are huge.

The central bank governor, Lamido Sanusi, has had to embark on a tour to reassure the rest of the world about Nigeria's banks.

He is now in London meeting financiers and foreign investors.

By the end of this week, it is expected that the former CEOs of four banks will be arraigned in court.

Many people here are very cynical, though, about the police investigation of the wealthy debtors.

It seems likely that many of them will never be charged or taken to court.

Instead there are fears that this whole process may end in plea bargains, backdoor deals and bribes.