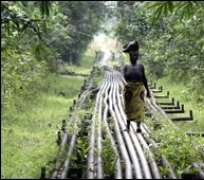 
The sectarian violence which broke out in several parts of northern Nigeria at the end of July has more to do with popular anger and frustration with prevailing economic conditions than religion, say religious experts and Muslim groups. Concerns have also been raised about the reaction of security forces.

The violence began in northeastern Bauchi State on Jul 26, when members of a Muslim sect known as Boko Haram (meaning "Western education is forbidden" in Hausa) were arrested on suspicion of planning to attack a police station. In the days that followed, police stations and other government establishments were attacked across four other northern states, Borno, Yobe, Kano and Katsina.

According to the Nigerian Red Cross, 780 people, mostly members of the sect, died in Maiduguri alone, where sect leader Mohammed Yusuf was based. Confrontations between members of the sect and security agents have displaced thousands more, mostly women and children.

The Boko Haram's stated reason for the attacks was to fight against Western education and values. The group, is known to have been tracked by Nigerian security forces for several years, also wanted Islamic law instituted in every part of Nigeria.

Alleged executions raise questions
Police announced that the sect leader Yusuf was killed while trying to escape police custody on the night of Jul. 30, but there are persistent allegations that he was in fact executed after being apprehended. Similar allegations surround the death of one of the sect's wealthy supporters, former Borno State commissioner for religious affairs Alhaji Buji Foi, who was killed while in police custody on Jul. 31.

The Afenifere Renewal Group, a prominent Yoruba socio-political organisation, has called for a probe into the death of Yusuf. Yinka Odumakin, national publicity secretary of the organisation, said while Afenifere was not in support of the actions of the sect, Nigerians would have benefited more if the sect leader was allowed to speak in an open trial.

"We would (then) have known the real motives of his group and its financiers. The large cache of arms and weapons manufacturing centres traced to the group were not something a 39-year old school dropout would have put together without backers," Odumakin said.

"No matter the offences Yusuf and his group might have committed as a human being, he was entitled to right to life under the 1999 constitution until a court pronounced him guilty (and sentenced him to death)."

Amnesty International has also condemned what it called "illegal killings by the Nigerian security forces" and called for an investigation into the killing in detention of Mohammed Yusuf.

Roots of crisis
Professor Murtalal Muhibbu-Din, head of of the department of religion at Lagos State University (LASU), said that the crisis was born out of anger and frustration rather than religious faith.

Muhibbu-Din told IPS in Lagos that the rate at which the problem spread across the north showed that many people, especially unemployed youth, are frustrated and angry with government over their dire economic situation.

"The people are frustrated and they are just looking for any means to confront the government of the day for not providing them the basic necessities of life," he said.

"The teeming unemployed youths can be easily mobilised. What they said they were fighting against, such as Western education and Western values, are just smokescreens to vent their anger on the government. That is why they are attacking police stations, which they see as government establishments."

Boko Haram's hostility to Western education is not one widely shared by Nigeria's estimated 70 million Muslims. According to Muhibbu-Din, Islam does not say people should not seek knowledge, noting that religion generally promotes peace, understanding and brotherliness.

He argued that there is in fact need for the youths to be better educated. "High levels of education - including girl-child education - will help improve the lot of the people and create employment opportunities. They should also be provided with social amenities. Once these are done, the problem of religious or even other crises would be solved."

Empower women to protect them
Senior programmes officer with the non-govermental organisation Baobab for Women's Rights, Alhaja Mufuliat Fijabi agreed with the don. "The Holy Quran likens education to light, and Muslims - including Muslim women - are encouraged to seek knowledge whether Western or Islamic," she said.

Baobab, which works to defend and develop women's rights in terms of customary, secular and religious laws, noted that large numbers of women and children had been affected by the events of the past week.

"We strongly call on the government both at the state and federal levels to respond promptly to the plight of the displaced persons by providing them with relief materials, health facilities and education," Fijabi said.

The Maiduguri Police Command says that it rescued 180 people abducted in Bauchi by members of the sect and taken to Maiduguri. The state police spokesman, Isa Azare, explained that the women and children were deceived by their husbands and teachers into believing that they were travelling to Maiduguri to attend a religious function.

Fijabi explained that many women, due to a lack of information, education and status within their families, are not in a position to caution or resist their spouses in such situations. She called on NGOs, civil society groups and the government to sensitise women to know what to do in times of crisis beyond running about in confusion worrying about the whereabouts of their children.

"Government should also provide adequately for the law enforcement agents to detect and nip in the bud such crises and also to enable them respond quickly in such situations."

In her private capacity, Fijabi added that behind the recent crises in Nigeria is the lack of avenues for people to air their views leading to frustration and anger.

"If there is a forum where aggrieved persons can come together and discuss, there will not be any pent-up anger which usually bursts into such crises. Citizens, especially youths, should be encouraged to air their views and the government must be ready at all times to listen to them," she said.

Meanwhile, the Jama'atu Nasril Islam (JNI), the umbrella organisation for Muslims in Nigeria, described the masterminds of the crisis as murderers and a gang of criminals.

In a statement, the acting secretary of JNI, Abdulkarim Pallan, was quoted as condemning the attack against Western education saying it was evil and called on security agencies to bring members of the sect to books.

"As the umbrella of Islamic Organisations in the country, Jama'atu Nasril Islam cannot fold its hand and watch the carnage and madness that is going on in the country especially in the North East in the name of Islam.

"We call on all Muslims in the country to condemn these criminal activities and give maximum support to the security agencies in preventing these misguided youths from attacking any body or agencies in the country," Pallan said in the statement.