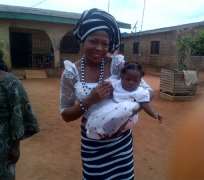 Idoma, Benue State-born up and coming actress, Susan Peters has adopted a child. The globe-trotting Nollywood actress recently announced this on Twitter some hours ago. According to what Nollywoodgists.com gathered from sources close to this actress, Susan, adopted a baby girl.

Susan, who once told Nollywoodgists.com that she would have become a pilot, runs a charity organisation called 'Susan Peters Foundation.' She has been in the news for some controversial issues which include the display of her Blackberry porsche, her reported hijack of a fund-raiser show held in December 2011 involving two teenagers.