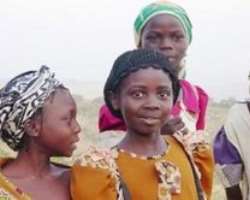 Written by Victor Ebimomi and Funmi Falobi
Lagos — Police play important role in the protection of lives and property in any society. In developing nations like Nigeria where the policemen are not well equipped and empowered to carry out their duties effectively, they face a lot of risks and are confronted by many encumbrances.

Apart from armed robbery, another area that usually poses a serious challenge to the police is in tackling sexual abuse crime. The crime is a major problem in African society and it has shattered the lives of many children. Today, it is gradually assuming an alarming dimension in the society----a silent holocaust that if care is not taken could destroy the lives of more children who are supposed to be the future leaders.Therefore, for the police to be able to face the challenges head-on, there is need for enabling laws that would speed up prosecution of offenders when caught by the law enforcement agents. It on this note that Media Concern Initiative for Women and Children, MEDIACON, a non-governmental organisation (NGO) organised a consultative meeting with the police to seek the way forward on criminal justice system response to child sexual abuse in Lagos State.

Being an interactive gathering, the police opened up on the array of challenges they face in pursuing sexual crime amidst laws promulgated by the government. The government officials also were also full of lamentation over the impediments on their ways, one of which they identified as the slow pace of police action.

However the MEDIACON Executive Director, Princess Olufemi-Kayode, explained that the essence of the gathering was to know the challenges faced by the police in the state and to keep the uniform men abreast of the facts on child sexual abuse.

"New trends keep coming up on daily basis on the issue and there is a need to keep the police abreast of the situation and also to upgrade the criminal justice system", she said, adding "Nigeria needs to meet up with countries that have recorded success in the fight against child sexual abuse and other forms of violence against women and children. There is also the need to accruing something to social issues which Nigeria has not done well".

According to her, child sexual abuse is a process which involves coercing, tricking, threatening, bribing and pressurising a child into sexual awareness or activity. The method, she said, is progressive and usually by somebody the child is familiar with like the father, uncles, brothers, nephews, cousins or neighbours while the dreadful act can happen anywhere either in the home, school or any other environment.

"Those who abuse children cut across disciplines. It is not an issue of class, profession or ethnicity. The victim is groomed and most times pampered by the offenders to carry out the sexual abuse. A sexually abused child results to prostitution and other social vices," she stated.

She therefore advised that there should be no sentiment when it concerns the issue of child sexual abuse because the future of the victim and the future generation is being hampered. She also tasked the parents to always be closer to their children and discuss the issue of sexuality with them so as to guide and prevent them from being abused.

"Parents should have a good relationship with their children. They should provide forum where children can speak with them without prohibition. The children need to know the body parts and the no-go-areas in their body. It is the duty of the parents to protect the children," she advised.

The police on its part lamented that the Lagos state government was inhibiting their work through its laws. According to them, the new law on magistrate court signed recently by the state Governor, Babatunde Fashola, wants to usurp their job. They also bemoaned a situation where lawyers teach suspects what to say because it normally affects their investigative jobs. Another major constraint, they pointed out is getting information from mobile service providers.

Speaking on behalf of the police, the state police command spokesman, Frank Mba, maintained that the state government was becoming too idealistic on the criminal justice system. According to him, there was nothing wrong in importing ideas from Europe but the government should look at its compatibility with the Nigeria society.

"If you want law to work effectively, the society should be taken into cognisance. The power supply is very poor, no CCTV camera not to talk of video camera and you want to investigate. Many national institutes have come and gone in this country but the police have remained at the expense of our lives and marriages. By nature of our training we are supposed to be seen and not heard. We should rather enhance the capacity of police to deliver justice service," he explained.

Mba added that the biggest challenge the police face in tackling sexual abuse crime is the family, societal attitude and forensic capacity stressing that even the people do not trust police to do justice and so some of the cases are not reported. "Where the case is reported, police have evidence and charge suspects to court, the family would intervene pleading to settle out of court and that would be the end of the case", he said.

Senior Special Assistant to the Lagos State Attorney General, Hakeem Bello, however contended that the new magistrate law is a step to harmonise criminal act in the state. He clarifies that the law was not to victimize the police but to develop professionalism among police officers. The law, he stated, is meant to encourage police officers who are lawyers to prosecute and therefore advised that "police should encourage their officers to study law and prosecute cases professionally". Specifically, he wants the police to develop their competence in the area of criminal investigation and leave prosecution to lawyers.

Bello noted that could be very traumatic experience for a child to be sexually abused and appealed that such cases should not be swept under the carpet stressing that "the crime is against the state, the victim and the family".

Principal State Counsel, Office of Public Defender (OPD) Mrs. Toyin Akinlosotu, disclosed that in spite performance of the agency, there still exist clogs that reduce the speed of the wheel of justice.

She identified some of such clogs to include a situation where offenders claim ignorant of the fact that sexual abuse is a crime and the prosecution procedure by the police. She noted that as much as the police can be commended for their tremendous efforts, there is still room for improvement.

Akinsolotu disclosed that DOP also faces the challenge of instituting rape matters in court and follow- up by the police. "In most of our cases we find that sometimes the police are rather reluctant to charge rape or defilement matters to court. It seems they would rather the matter be settled out of court to initiate settlement between parties concerned".

Akinlosotu said that another major constraint is with the law. According to her, the criminal code provides prosecution of sexual offenders within two months from time of the commission of the crime but the time limit impedes work to be done as investigation on the matter can at times take longer than two months. She thus demanded for extension of period to allow victims get justice.

At the end, the forum recommended that there should be enlightenment campaign and strengthening of juvenile and women centres in police formations amongst others.