He is a blessing to Anambra - Archbishop Okeke
By Mazi Oderaigbo 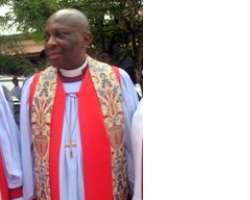 Archbishop Christian Efobi said that he would keep talking about Gov. Peter Obi because he was a Governor all men of goodwill should love for restoring credibility to governance and for being a man of his words. He said this yesterday during the presentation by the Governor, of a brand new 18-seater bus, ten computer sets complete with accessories and the sum of 4 Million Naira to St. Christopher Seminary, Ekwulobia for their various projects - laboratory, sports and transformer.

Receiving the donation, the Archbishop, Province on the Niger, Most Reverend Christian, while thanking the Governor for the gesture, assured that the Church will continue to uphold the partnership with the State government, as well as support his administration with prayers. Most Reverend Efobi assured that they will live up to expectations.

He said that the idea of giving money directly to institutions for projects was working as everybody could see the result. He gave example with 25 buildings the Govt is executing in missionary hospitals.

Speaking at Tansi secondary school, the Catholic Archbishop of Onitsha Ecclesiastical Province, Valarian Okeke said that gov. Obi was God's precious gift to Anambra State. He said he was the only Governor since the end of the war in 1970 that had made genuine and serious efforts to build the human infrastructure. He commended him for what he called his "foresight, courage and exhibition of Christian virtues."


In his remarks, Gov. Obi, who was on his way to Abuja for a meeting with President Goodluck Jonathan with his Kogi State counterpart over disputed oil wells, assured that his administration will continue to fulfill promises made to the people as part of measures to restore confidence in governance. Governor Obi explained that proper equipping and empowerment of schools will enable students to explore their full potential and acquire the necessary knowledge and skills and become productive citizens. He restated that all schools returned to the mission will continue to receive financial support for the ongoing rebuilding process.

In his own remarks, a community leader, Chief Anthony Oguejiofor said that the gesture Obi is showering on schools was last done during the regime of Arthon Kpela.