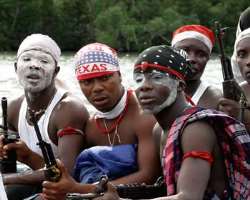 Some 10,000 militants could benefit from an amnesty in Nigeria's oil-producing Niger Delta region, a military official has said.

Air-Vice Marshal Lucky Ararile said militants who disarmed would be paid a monthly allowance while being reintegrated into civilian life.

However correspondents are sceptical about the figures, saying there are hundreds, not thousands, of fighters.

The main militant group has called a 60-day halt to attacks in the Delta.

This followed the release of militant leader Henry Okah on Monday, as part of the amnesty.

The unrest in the Delta has caused a sharp drop in Nigeria's oil production in recent years. AVM Ararile said the militants were based at up to 60 camps around the Delta.

He said the authorities were setting up 27 collection and reintegration centres for the disarming fighters, mostly in Rivers, Delta and Bayelsa states where the violence has been worst.

After a major military offensive in May, President Umara Yar'Adua proposed the amnesty, in an offer which lasts until October.

The Movement for the Emancipation of the Niger Delta (Mend) says it is fighting so local people benefit more from their region's oil.