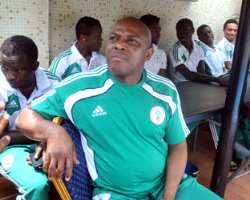 Team Secretary, Dayo Enebi Achor, advised the invited players to resume at the Bolton White Apartment camp of the team on Sunday with their international passports and two passport photographs.

Kano Pillars' midfielder, Gabriel Reuben, gets a recall after injury sidelined him from the squad. The 2012 League Bloggers Awards Player of the Year and Best National Team Player has been ruled out for several months but if fit, he is a big boost for Keshi as he gradually aims to blend the home-based players and their foreign-based counterparts.

Niger Tornadoes' Okey Azubuike and Tony Okpotu of Lobi Stars are also in the squad after U-20 duty with the Flying Eagles.

Enyimba, Rangers, Sunshine and Lobi Stars provided two players each while Gombe United, Niger Tornadoes, Sharks and Kwara United had one player each.