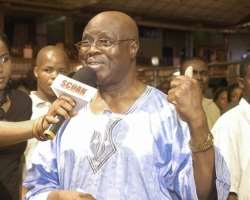 Moses Adeola loved God and desired to serve Him. An elder in a Redeemed Church (RCCG) parish in the US, he was always seen in church praying and praising God, striving to commit himself wholeheartedly to Christian services. But there was a big hindrance, a deadly hindrance. Unbeknown to his fellow worshippers, Moses was entangled in the dark and dangerous grip of evil spirits, who tormented him continually and manifested to him physically. How they came he did not know, but their mission was clear – to disrupt and destroy.


“The demon was chasing me right from the US”, he recalled. “It kept attacking me in the dream. Even when I was not sleeping, it was like wresting with me. The demonic attack comes all the time – it lives inside of me.” Having searched for solution on American soil to no avail, the constant battle left him weary, bewildered and almost bereft of hope. He had fasted and prayed relentlessly, but the ordeal persisted. Driven to desperation, Mr Adeola decided to visit his homeland Nigeria.


“Before I left, I had to struggle with it – we were struggling together,” Moses recollected. “I had to beat him out and run out – but it was like the demon was chasing me. Even when I was in the plane – I still saw it.” This nightmare went beyond the night, with Moses visibly seeing the demon, taunting and confronting him at will, especially at times of increased devotion for God.


In Nigeria, he decided to visit a church where he had witnessed the living power of God – The Synagogue, Church Of All Nations in Lagos. There, on Sunday 7th June 2009, he had a remarkable encounter. “I see you have a heart for God,” T.B. Joshua told Moses, having spotted him in the midst of a large crowd of newcomers on a packed Sunday Service. “You love Jesus. You are always in the church praising God, but there is an evil spirit in your life. A demon possesses you.” The prophecy was precise. “That is why I have come here,” affirmed Adeola, sensing his day of freedom had arrived.


“This time, he appeared to you physically – face to face,” continued the prophet. “You can see physically that a demon is using your body as a dwelling place. It has destroyed you, destroyed your family, destroyed your career – everything!” Moses looked shocked – a man he had never met personally was publically proclaiming his life story and the very reason of his visit to the church that day.


Stretching forth his hand, T.B. Joshua authoritatively commanded the demon to come out of him in the name of Jesus Christ. Instantaneously, Adeola fell to the ground, writhing restlessly on the floor. The battle was short. The evil indwelling his body made for a quick exit, no match for the superior power before it. Darkness cowered before the light.


“It's out!” declared Joshua moments later, the crowd bursting into spontaneous and rapturous applause. “You are an elder in the church,” the prophecy continued. “Can you see demon? A demon is a foolish thing, and it's now tormenting an elder in the church,” said Joshua, angered at the spirit's evil audacity and intent. “But it's over now – it will never come on you again.”


Rising tentatively to his feet, somewhat overwhelmed by the extraordinary experience, Moses solemnly began to thank God. Liberty had finally come. “Seriously,” Moses later told the prophet, “I was thinking when I get back to the US, I will not go back to that church again. The church I was going to was Redeemed Church – but I don't know where this demon came from.” Advising Moses, Pastor Joshua replied, “As an elder, don't leave the church. Stay in the church. The demon will not torment you again. Continue your services of God there – don't leave the place. I will be your friend, your partner in prayer there.” Onlookers commended the selfless advice. “I have the victory now,” a relieved and joyful Moses concluded, “and I thank God for it.”


With the increasing acclaim and patronage of Joshua's television station Emmanuel TV, alongside the steady flow of testimonies from recipients and viewers, his ministry has maintained a rapid growth. The unique combination of prophecy and healing coupled with extensive charitable and reconciliatory works is attracting people of all colour, class and culture to his Lagos-based church.