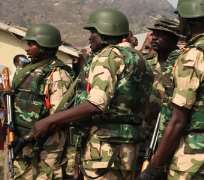 SAN FRANCISCO, October 23, (THEWILL) – The military Tuesday launched a massive house to house search in Kano in search of kingpins of the Boko Haram.

The military particularly zeroed on the Hotoro, Tsamiyar Boka and Tishama areas of the metropolis.

THEWILL gathered from eyewitnesses that the search lasted for several hours all through Tuesday night.

The house-to-house search forced Muslim residents to abandon their usual morning prayers in the mosque.

The spokesman of the Kano state branch of the military task force team, (JTF), Lt. Ikedichi Iweha confirmed the search saying, no arrests have so far being made.

The Boko Haram terrorist group has claimed more than 1000 lives since it launched a campaign against the Nigerian state.