Tonto Dikeh Replies Critics: I Achieved What I Wanted 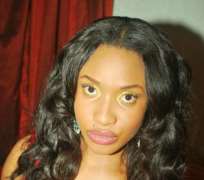 Few minutes after her much-anticipated release of her singles, controversial Ikwere, Rivers State-born actress, Tonto Dikeh became a national issue because of responses her songs got. On social media platforms, almost everything related to Tonto became treading.

One of two singles, 'Itz Ova'; 'Poko' and 'Tonto Dikeh' flooded the social media world and the internet. Tonto became another platform of jest making by many.

After the harsh comments the Petrol-Chemical university graduate has got, Tonto finally responded to her critics. "I wanted to do music that millions would listen to and I have achieved that. Bigger things ahead for all of us. Thanks. 'Hi', Itz Ova. POKO," Tonto, The Next Movie Star 2006 contestant tweeted.

Tonto announced her intention to go into music in 2011. She later went to the studio with popular singer, Kas. Before now, many had waited to know if Tonto would be the first Nollywood star to successfully join the music industry to be in the A-list category of singers in Nigeria. For now, the search continues.

Tiwa Savage In Another Romance Allegation