Stars invasion as the movie, Hoodrush premieres at Silverbird Galleria 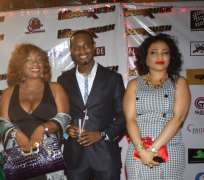 It was indeed a carnival-like atmosphere last Friday at the upscale Silverbird Galleria when the crème de la crème in Nollywood and by extension, the entertainment circuit attended the exclusive premiere of the much talked about movie, Hoodrush.

Channel O presenter, Denrele hosted the movie's red carpet; he was spotted in brown shiny attire with long and weird shoes to match. He virtually conducted the activities on the red carpet on the night and he did well as usual. The premiere also had in attendance, journalists from all walks of life.

The cinema hall was filled to capacity with many people sitting on the floor while a few others leaned against the wall of the hall in an attempt to watch the movie. The movie certainly lived up to its billing as it got the audience cheering and crying as well. Some of the scenes of the musical flick were too emotional for comfort. The duo of Nollywood actresses, Uche Jombo and Nse Ikpe Etim amongst others had heavy eyes during the movie as they connected with some emotional scenes in the movie.

The producer of the movie, Dimeji Ajibola could not contain his joy after the premiere ''I am indeed overwhelmed and proud to have these wonderful people here tonight for this premiere, I am even happier because they love and appreciate Hoodrush, they spoke kindly about it and connected with the movie. The people at home need to see this movie too, Hoodrush is certainly a big plus to all that Nollywood stands for''.

The movie has been described as one of the best if not the best in the industry this year. Scenes moved many to cry and the loud ovation that greeted the end of the movie signalled the happiness and satisfaction that people experienced at the end of the movie. 'This is a very good movie, I cried in the hall' Nse Ikpe Etim said after the movie.

After the movie, the fans of the movie, carried the director and producer of the movie, Dimeji Ajibola and Gabriel Afolayan up on their shoulders and were chanting the names of the duo, apparently satisfied with the efforts of the duo in the movie, it was indeed an emotional moment for the two of them.

The movie, Hoodrush is now showing in all cinemas across the nation.