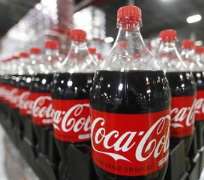 Coca-Cola Co reported quarterly revenue that came in short of Wall Street expectations on Tuesday, hurt by declines in Europe and Asia where it sold more lower-priced drinks.

The world's biggest soft-drink maker, with brands such as Sprite, Fanta and Minute Maid, also said revenue and profit were hurt by the stronger U.S. dollar, which reduces the value of overseas sales. Still, earnings were in line with analysts' expectations and shares edged slightly lower in premarket trading.

Coca-Cola gets the majority of its sales from outside the United States, so shifts in currency can have a big effect on results. In the third quarter that ended on September 28, currency shaved 5 percentage points of growth from net revenue and 7 points from operating income.

Aside from currency, results in China and Europe were disappointing, said Sanford Bernstein analyst Ali Dibadj, while North America was slightly better than expected.

"I think China being tough and Europe being tough certainly are not a surprise," Dibadj said.

The European economy has been pressured by a debt crisis in the region while the economy in China, a growth engine for multinational companies in recent years, has been slowing, although still growing.

Excluding items, earnings were 51 cents per share, in line with analysts' average estimate, according to Thomson Reuters I/B/E/S.

Still, revenue fell 8 percent in Europe and 4 percent in the Pacific region, after the company sold a larger percentage of lower-priced drinks. In addition, sales volume in the Philippines was flat, due to typhoons. In Japan, soda volume fell 5 percent from the year-earlier period when new products boosted sales. Volume rose 2 percent in China.

Closer to home, North American revenue and profit rose, helped by a recent acquisition and the impact of certain commodities hedges.

Coke is also seeing tougher competition from PepsiCo Inc, which is working hard to improve its North American beverage business. It has increased marketing spending with a focus on core brands like Pepsi-Cola and analysts have been saying that the renewed effort is working.