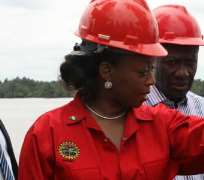 Describing the flood that has swept through several states in the country as a major disaster, the Minister in a statement by the Group General Manager, Public Affairs Division of the Nigerian National Petroleum Corporation (NNPC), Fidel Pepple said, there has been no report that the rising water level has adversely affected installations, but however admitted that most of the area where the installations are located have been covered by water.

“At this point in time, we have not received any report that any of our installations have been adversely affected but we are still receiving the reports as we speak.

“If the water level continues to rise, we will find out what the impact is but as at now we have no report to that effect.”

Mrs. Madueke, whose chopper was unable to find a solid ground to land expressed shock and disbelief at the level of devastation.

“I have flown over other communities in Delta and Rivers states as well as my own village in Bayelsa state and in all these areas we could not find a single solid ground to land and that in itself means that we are facing a major tragedy.”

President Goodluck Jonathan last week approved N17 billion to be shared amongst states affected by flood. The President has also toured some of the states including Kogi, Delta, Anambra, and Bayelsa.

THEWILL gathered that the President will be in Adamawa on Monday, where over 400 communities have been sacked and more than 20 schools have been completely destroyed by rising water.