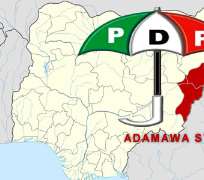 ABUJA, October 08, (THEWILL) - The raging crisis rocking Adamawa State chapter of the Peoples Democratic Party (PDP) reached its height on Monday when elders, leaders and stakeholders from the state asked the national leadership of the party to immediately dissolve the current leadership structure of the party in the state and conduct fresh congresses.

They declared unequivocally that the party in the state is without an executive and asked the PDP headquarters to disregard those parading themselves as members of the executive who they said were installed by Governor, Admiral Murtala Nyako (rtd).

“That the national Leadership dissolve all the organs of the Party in the State, from Ward, local government to state levels; immediately appoint a Caretaker Committee comprising credible party members and headed by a respected Party Elder to undertake the tasks of harmonizing and standardizing the State Party Registers and thereafter conducting free, fair and transparent congresses throughout the state,’’ the stakeholders said.

They all agreed that if the political quagmire in Adamawa State PDP must be nipped in the bud, there is an urgent need to carry out the establishment and maintenance of a standard membership register as stipulated in the PDP’s Constitution.

“The simple truth is that without a standard and authentic party register. In fact, to date, INEC is waiting in vain for over three years for the PDP to submit to the Commission its comprehensive membership registers of the state. To all intents and purposes, PDP does not know the strength of its members simply because it has no comprehensive standard Membership Registers. This is the first failure of the PDP in entrenching Internal Democracy in party politics in Adamawa state and in Nigeria.

“There is also an obvious moral obligation on the part of the NWC to conduct Congresses in the state, having given the people of the state the pledge to do so several times. The NWC must not be seen to have reneged on this promise, thus failing the people. This will have a damaging effect on the integrity and credibility of the National Leadership of the Party in the eyes of the people of the state, more so with the National Chairman coming from the State.

For these compelling reasons, holding of congresses in the state is the best and in fact, the only credible and logical solution to the Adamawa problem,” they said in a statement read to journalists.

According to the Adamawa State PDP Stakeholders, the Committee which will comprise credible party members and headed by a respected Party elder will conduct free, fair and transparent congresses across the State as well as harmonize and standardize the State Party Registers.

The leaders who backed last week’s decision of the national leadership of the party to reject the state’s PDP Local Government primaries, adding that the move to conduct fresh congresses in the state would be a litmus test for Bamanga Tukur.

According to the PDP Stakeholders, “the Adamawa issue is thus a litmus test for this NWC to make a clear difference.

“Returning the party back to the people simply means entrenching the principles of ‘internal Democracy, participatory Democracy, and Institutional Collaboration and Cooperation’ in party affairs in accordance with the provisions of the party and national constitutions and relevant extant laws of the land.’’