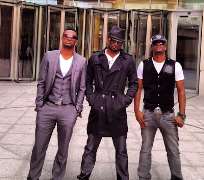 There have been reports that a representative of Square Image Associates (SIA), which is the publicist of P-Square and Square Records told a news site that the label has concluded plans to sign a Ghanaian artiste which is to serve as a replacement for May D, who left the label some weeks ago.

It was earlier reported that Predy X, who is a Ghanaian artiste was on the verge being signed by Square Records. It was also reported that he was getting set to finally move to Nigeria to sign the contract agreement.

Reacting to the news story through a press statement which was made available to Nollywoodgists.com, SIA dissociated itself from the story. It claimed that the story was the handiwork of some lazy amateurs, whose intention is to get undue attention by spreading baseless information. SIA claimed that at no time did it or any of its representative talk to anybody on Square Records signing a Ghanaian artiste or any other person.

"TO WHOM IT MAY CONCERN

Our attention has been drawn to a false claim that the publicist of Square Records said that the respected record label have plans to sign a Ghanaian artiste. We want to use this medium to say that there is no iota of truth in the fabricated report.

At no time did any representative of Square Image Associates (P-Square's Publicist) or Square Records speak to anybody about any artiste in Nigeria, let alone Ghana.

The report is simply the handiwork of some lazy amateurs, whose intention is to get undue attention by spreading baseless information. Members of the public and fans of P-Square are hereby advised to ignore the rumour.

Since May D left the music label, it has not signed any other artiste