SO OCTOBER 1 IS NOW A MILITARY AFFAIR 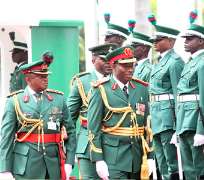 President Goodluck Jonathan has transformed October 1. It is understandable. Nigerians are aware of his zeal to transform the nation. And now the military is what the world sees on a day that belongs to civilians. But citizens could recollect the carefully starched folds of babanriga, that stood at right angles on shoulders, when presidents such as Shehu Shagari and Olusegun Obasanjo stood at parade grounds, watching as Nigerians proudly and joyfully filed past during some October 1 independence anniversary celebrations. On October 1, 2012, the president turned out in army uniform, and as one youth accused last year, the cream of the Nigerian society hid in the grounds of the State House to celebrate the nation’s independence. Sure, State House is a long way away from Nigerians who are used to looking forward to two major days each year - May 27 which is Children’s Day, and October 1, for the nation’s independence anniversary celebration.

The military has its day, January 15, but now the presidency has added October 1 to it. That followed the October 1, 2010 bombing in the course of the independence anniversary celebration at Eagle’s Square, Abuja. There was an official excuse for avoiding the public space in 2011. Nigerians heard at the time that the nation needed to mark the anniversary on a low key, and that only a change of guard parade would take place in the State House grounds. None of such story was circulated this time. The president simply gathered men and women around himself and effected a change of the guards that see to his security, that of his family, the State House grounds, and by extension the Federal Capital Territory, FCT. It was all the spectacle that Nigerians got for a day which had traditionally spurred its own flurry of economic activities for millions across the nation. Even roads in the FCT that were usually festive were deserted.

Some may say maybe it’s better that some officials don’t allocate billions of naira to another grand jamboree in the name of independence anniversary celebration. But the point here is: what is happening is an indication of how much the leadership is unable to frontally confront and effectively juxtapose disparate issues, come up with ways out of the challenges that Nigerians identify with the most, and project to the same images which give them confidence that the government is on top of such challenges while showing the leadership’s resolve that it is not cowed by whatever is happening, security-wise. And there’s also the angle to what the leadership is saying at a time Nigerians worry about the most basic needs around them. Flooding, fuel scarcity, insecurity, crime, unemployment as well as the rampant institutional and VIP rascality. It was a different language people listened to during the independence day address, what with their leader dressed first in Ijaw civilian attire to make glorious claims, before he later changed into an army uniform and marked October 1 supervising a change of guards parade.

“Beloved country men and women.” That was how the number one citizen began. “Our founding fathers brought great joy and hope when they won independence for this nation…” he had followed it up. And that was good. Founding fathers, civilian founding fathers, not the Nigerian armed forces. So what the military was doing, taking the limelight on October 1, remains a thing the presidency will still have think hard to justify. Then the president went into the history of how it all happened in 1960. He mentioned civilians in all of it, not the military that has taken over the last two anniversary celebrations. Then he went on to, “call on all Nigerians to remain steadfast, because our nation is making progress.” One would think such a rallying call should come after he had told all what his administration had achieved so far, what to look out for - those things that Nigerians could identify with and nod their heads as worthy of remaining steadfast for. But the call came first, then rather lamely, the usual list of what had been achieved in the last two years. A plus for the president, that one. The last two years. Nigerians were not insulted on that occasion with a claim that he arrived office in May 2011, following the presidential election. The president, in the course of the address, always went back to May 6, 2012, unlike what some of those around him, and those far away from him, often claim depending on what they were defending or refuting.

In the president’s list of what was achieved, successful conduct of election came first. Nigeria has achieved a rare pedestal concerning conduct of election, he had said, and a thing for which the international community now praises his administration all the way from Abuja into outer space. And the economy is doing enormously fine, too, in spite of unfavourable global conditions. The nation’s GDP has been growing by 7.1 percent on the average. Nigeria is the preferred destination for investors, the president said, for the nation accounts for over 20 percent of all foreign direct investment flowing into Africa; it was his evidence of good performance. As for power supply, “It is improving gradually.” Alright, when the rainy season, during which there is power surge due to more water that is available in hydro power stations is over, Nigerians will confirm the claim. The administration is proactive on security challenges, he added, and he expressed his sympathy to the family of those who had lost loved ones in the violence of recent past.

In the last two years, the president said, health sector has improved, and it is because his administration has been devoting resources to the reduction of incidences of malaria. “We are fighting corruption” in every sector. Scam in fertilizer importation and distribution, for instance, has been stopped. Pension scam? The syndicate has been blown apart. To buttress the claim about an all out war against corruption, allusions were made to an index from an international body, as usual. This time, it is Transparency International (TI) which claims government officials had disparaged in the past, also, depending on what they were defending or refuting. The president said TI notes in its latest report that Nigeria is the second most improved country in the effort to curb corruption. Whoever put that portion in the president’s speech should be awarded a prize as the dumbest person on earth. A nation’s president addresses his citizens on an issue as serious as corruption, and an outside organization was the best that could be cited for credibility purposes.

At this rate, and before long, Nigerians won’t take their president at his words anymore. In any case, TI has disowned the claim, insisting it has no such rating that places Nigeria as the second most improved country in the fight against corruption. Its most recent indexing of Nigeria corruption activities was in the 2011 Corruption Perceptions Index; it had measured perceived level of public sector corruption in the country, and in it, Nigeria scored 2.4 on a scale where 0 means highly corrupt and 10 means very clean. The nation was ranked 143 out of 183 countries, a dip in performance as the country was rated 134 out of 183 countries in 2010. Meanwhile, the president had said a day before his October 1 speech that his “administration is setting records” in every sector. Yes, and it includes making the military take over a day that the Nigerian general populace consider theirs.

Does it occur to anyone around the presidency that the administration is alienating itself from the citizens, the same ordinary citizens who would fill the streets when discontent rises to an optimal level? Does anyone consider that the president is being cordoned off on too many occasions, that an event which should be a rallying point for bringing the citizens around common goals is being handled in such a manner that shows violent groups have achieved their aim of sowing fear in places where such should not be imagined? The one occasion when the presidency could gather citizens around itself, and let people celebrate their victory in a battle for independence that their fathers fought (not the military), or helped to achieve as they had voted from 1951 through 1959, is now being denied them.

No excuses the presidency gives can hide the fact that it stays in the State House grounds, its agencies shying away from the responsibility of maintaining security in places where Nigerians could celebrate with their president. This is not a good sign, it isn’t at this time when the president needs all the moral support his citizens could give him as he strives to fulfill his election promises. The people are the pride of a king, they are his clothes. One thing the current turn of events indicates is this: Some institutions around the presidency can no longer carry out their constitutional duties effectively. It should be of concern to the president, and make him consider re-jiggling the brains he surrounds himself with. He should return a day that belongs Nigerians to them. October 1 is not for the military. It is for civilians.