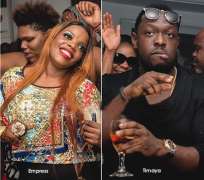 Rumour has it recently that the actress, Empress Njama and Egberi Papa 1 of Bayelsa, Timaya have settled their differences as they were said to have exchanged pleasantries at the 37th birthday of 2face which held last Tuesday, at Club Rumours, G.R.A, Ikeja, Lagos. But reacting to the story when contacted, Empress said she has nothing in common with Timaya again.
CLICK AND READ IT HERE
“ I and Timaya are not dating again. He saw me at the party and came to exchange pleasantries with me. There is nothing wrong with that. If we are not dating again does not mean that we are sworn enemies,“ Empress said

According to the rumour mongers, the erstwhile lovers arrived the venue at different time.
Empress was said to have sat at the same table with some of her Nollywood colleagues when Timaya reportedly got closer to her and whispered something into her ear as they both laughed.

“He was just trying to be nice and Empress replied him, saying “That's that.” a source disclosed.

If you recall, Timaya and Empress Njamah began dating over four years back. But in August, 2009, at a church in Festac, Lagos, Timaya was reported to have been beaten by some naval men when he stormed the church with the aim to attack Empress.

He was said to have caused fracas in the church, shouting that Empress should return the key to the car he bought for her. The controversial singer also reportedly called Empress a thief, a situation that led to their permanent separation. Timaya has since moved on with his life. In May 2012, he welcomed his first child, a baby girl from his girlfriend.