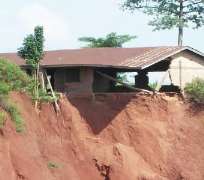 SAN FRANCISCO, September 17, (THEWILL) – At least nine residential buildings have been pulled down by a gully erosion that occurred along the Atimbo water channel in Calabar Municipality while about 15 others are highly vulnerable to collapsing.

Similarly, 150 people have been displaced and are squatting with neigbours in uncompleted buildings in the area, according to Cross River State Emergency Management Agency (SEMA).

According to SEMA, the collapse of the structures was aggravated by erosion, which swept away a section of the water channel and eroded the banks on which the buildings were sited.

The channel, which crosses the Bakassi road at the Atimbo axis, is highly threatened as boulders are giving way as evident in the large cracks on the concrete floor and walls of the channel.

He said that while the governor would be urgently briefed on the development, relevant Ministries, Departments and Agencies (MDAs), such as the Ministries of Works and Environment, would be contacted to begin the process of rehabilitation of the damaged system.

He appealed to neigbours of victims of the collapsed structures to display brotherly love by accommodating them while they seek permanent alternatives.

One of the victims, a widow who recently lost her husband to assassins in Akwa Ibom State, Mrs. Helena Akpabio, lamented that the section of her apartment where she was residing had collapsed with her household property.

Akpabio who was with a three months old child said that she had no place to go and pleaded with the state government and philanthropic organisations to urgently come to her aid.

Another victim, Mrs. Josephine Asuquo, appealed to the state government to commence work on the rehabilitation of the channel to forestall further damage to lives and properties.