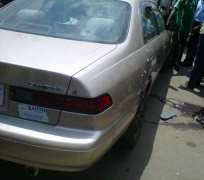 On Sunday afternoon of September 9, 2012, men of the underworld laid siege of the 'centre of excellence' for sometime at different locations. According to reports gathered by Nollywoodgists.com, some daredevil men stormed some bureau de change operators around Ifako-Gbagada area of Lagos State.

As we learnt, this was done with the intention of carting away some of their hard currencies. We gathered that the robbery left a boy and two policemen dead.

We also got reports that another robbery took place at Morgan estate, Ojodu Grammar School,Ojodu, Lagos. Casualties of the robbery was still sketchy as at press time.

There were also reports that multiple gunshots were heard around Pen Cinema, Agege, Iju and Ogba areas of Lagos.

Also, reports got to us that gunshots were heard around Aguda, Surulere, Lagos.

These have raised security questions in the city, especially prior to the proposed 2013 planned introduction of the single 5000 Naira notes, which some believe would increase crime rates in the country.