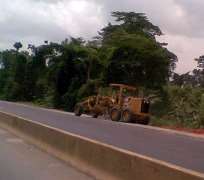 ABUJA, September 05, (THEWILL) - The Federal Government has endorsed the reconstruction of the remaining parts of the third phase of the Benin-Ofosu-Ore-Ajebandele-Shagamu Expressway.

The scope of work on the road — awarded to Messrs RCC Nigeria Limited in the sum of N65,223,155,642.34 and earmarked for completion within 36 months — would include the complete reconstruction of Kilometre9 to Kilometre18, and Kilometer75 to Kilometre 162 of the road, all of which will have three lanes on both carriage ways.

Labaran Maku, the minister of information flanked by Mike Onomelemen, minister of Works and Olajumioke Akinjide, minister of state for federal capital territory, briefed State House correspondents at the close of the Federal Executive Council (FEC) meeting, saying the contract was approved after a memo to council by the minister of works.

“The outstanding sections of the road are in disrepair; there is need to reconstruct them to ease traffic flow along the road,” Maku said. “The road, when rehabilitated, will not only improve the socioeconomic activities of the area but it will also reduce vehicle operating costs, travel time and accidents on the road.”

He further said the project, on completion, would create employment and improve the informal sector of the economy.

The FEC also approved the purchase of various search and rescue operation items for the National Emergency Management Agency (NEMA).

“The rampant increase in the spate of disasters in the country has continued to stretch the resources of NEMA on terms of equipment and logistics,” Maku observed.

Similarly, the construction of Southern Parkway in the sum of N10.901,23bn was approved, bringing the total contract sum to N16.235 billion.

Speaking further, Maku explained that the FCTA has embarked upon the construction of the Southern Parkway from the Christian Centre S8/S9 to Ring Road 1, comprising 10 lanes, to complement the existing Northern Parkway in order to reduce traffic congestion.

The sum of N2.835 billion was approved for Phase II contract for the provision of infrastructure to Apo Estate layout by Messrs Cat Construction Group (Nig.) Ltd, bringing the total money to be spent on Phases I and II to N5.755bn.

The council also sanctioned the president's anticipatory approval for the Sagbama erosion control rehabilitation works in Bayelsa State in favour of Messrs. Nigerian Westminister Dredging and Marine Limited in the sum of N1.501bn, to be completed within 12 months.