GOD, THE DEVIL AND THE 'DARK KNIGHT' TRAGEDY 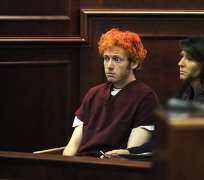 Last week’s shooting in Colorado, USA and the killing a daughter of a general by supposed Facebook friends in a hotel in Lagos, Nigeria should remind us that Satan is not a fictional character. Adapted from the writings of J. Lee Grady is the former editor of Charisma and the director of The Mordecai Project. Plenty of mystery surrounds last week’s movie theater massacre in Colorado. Why did the suspected gunman, James Holmes, stage his bizarre killing spree during a midnight showing of The Dark Knight Rises? Why was this guy so angry that he would amass $15,000 worth of weapons and ammunition and then break into a crowded cineplex to kill and maim people? Did he dye his hair orange because he identified with The Joker, the most sinister villain in the Batman universe? I’m not a crime sleuth. But if you ask me, the devil’s fingerprints are all over this tragedy.

It has always baffled me that people question the existence of Satan-especially when something as horrific as the shooting in Aurora, Colo., makes headlines. But according to a Barna Research poll from 2009, the number of people in the United States who believe the devil is real is declining. A growing number of Americans believe he is just a mythological personification of evil. Despite the fact that the devil is clearly described in the Bible, even some Christians doubt the existence of a literal Satan. Famous theologians and Christian leaders from the past, however, were convinced in the personhood of Lucifer.

Martin Luther, the father of the Reformation, said: “The world is a den of murderers, subject to the devil. If we desire to live on earth, we must be content to be guests in it, and to lie in an inn where the host is a rascal, whose house has over the door this sign or shield, ‘For murder and lies.’” British preacher Charles Spurgeon wrote: “Certain theologians, nowadays, do not believe in the existence of Satan. … Those who are most deluded by him are the loudest in repudiating all faith in his existence.” Author C.S. Lewis wrote: “There is no neutral ground in the universe; every square inch, every split second, is claimed by God and counter-claimed by Satan.” Evangelist D.L. Moody said: “I believe Satan to exist for two reasons: first, the Bible says so; and second, I’ve done business with him.”

Jesus Himself affirmed the existence of Satan. Jesus did not describe the devil as a beastly creature with horns, a pitchfork and a red cape. But He did call him a “thief” who comes to “steal and kill and destroy” (John 10:10, NASB). Jesus also described the devil as “the enemy” (Matt. 13:39), “the evil one” (Matt. 13:38), “the prince of this world” (John 12:31, NIV), “the father of lies” (John 8:44, NASB) and a “murderer” (John 8:44). Satan is the ultimate terrorist-a mastermind of wickedness, far more diabolical than any comic book villain likes The Joker or the trigger-happy Bane from The Dark Knight Rises. In a sense Satan is a masked criminal, since he hides behind the people he inspires to do his work. But we can be sure that wherever there is evil-a mass shooting, genocide, exploitation of the poor, global sex trafficking, organized crime or religious deception-Satan is pulling the strings behind the curtain.

The Bible says Satan was originally an angel of the highest order. When he rebelled against God and was cast out of heaven, Jesus saw him fall like lightning to earth (see Luke 10:18). Since that time, Satan (his name means “the adversary”) and his demons have waged war against God-and his plot is to destroy as many people as possible by deceitfully luring them away from God’s love and protection. Satan hates God, and he craves God’s glory and throne for himself. His pride drove him to become the ultimate psychopath. When he couldn’t have the authority he wanted, he declared all-out war on the human race. And he has duped millions of people to join him.

You can call me simplistic or old-fashioned, but I still believe the devil and his demons are real-and that Satan’s existence is the reason people like James Holmes carry out horrible crimes like the one we witnessed last week. You can’t explain that act of terror using psychology alone, and you certainly can’t blame it on God. What gives me comfort is the fact that Jesus defeated Satan once and for all when He gave His life for us. Just as Batman saved the day in The Dark Knight Rises, Jesus not only defeated Satan but promised to send him to hell forever. Once this chapter of history is over, the father of all villains will come to a very bad end. Have question you may call: 08033399821 or write: [email protected] Stay blessed.