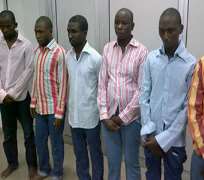 ABUJA, August 23, (THEWILL) - The Department of State Security Service (SSS) has handed over six suspects allegedly arrested in connection with the murder of the former principal secretary to Governor Adams Oshiomhole, Comrade Olaitan Oyerinde, to the Police.

Controversy had been raised after the suspects were paraded without Rev David Ugolor, the human rights activist, who was arrested by the Police after he was named by suspects also arrested in connection with the murder.

Addressing journalists at the SSS Headquarters prior to the handover, which took place at the Police Force Criminal Investigation Department (FCID) Headquarters in Abuja, deputy director, Public Relations, Ms. Marily Ogar said that the suspects would be handed over to the Police since it was an incident of armed robbery.

She also attempted to clear the air on controversy surrounding the parade of the suspects by the Service, stating that facts of the matter appeared to have been deliberate misinterpreted and manipulated.

“Certain interests have exploited both social and print media to peddle false insinuations that some of the suspects paraded on 1st August 2012, in connection with Comrade Oyerinde's killing, had been earlier paraded by this Service on 14th March 2012, as they appeared to have been dressed alike,” she said.

“It is pertinent to state that the suspects paraded on 14th March were three young men between the ages of 19 and 20, who were discovered to have conducted surveillance on two expatriate staff of Stalilini Visinoni Construction Company, McManus and Franco Lamolinara, before their abduction.”

“For the avoidance of doubt, both groups have no link whatsoever as they were apprehended for different offences, at separate locations and at different times.

“Also, the suspects arrested in connection with the kidnap of the expatriates were between ages 19 and 20 years while those apprehended over Oyerinde's killing are between the ages of 26 and 46 years.”

Ogar maintained that the service had never recycled suspects, and described any attempt to link the groups as diversionary and intended to trivialise and politicise the murder of Oyerinde, thereby aggravating the pains and agony of his family and friends.