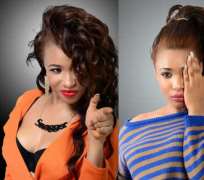 Nollywood actress Tonto Dike and Stella Dimoko of Encomium Magazine trades very harsh words in an interview recently. The interview was hilarious as Tonto dike did her best to match up with Stella.

Stella: You shot the movie, My Life, My Damage, with Uche Jombo; we are yet to see the movie but it is alleged that the drug addict role you played in the movie is your true life character.

Tonto: Here we go again. I am an actor for Christ sake. And I'm supposed to make my audience believe whatever role I interpret. If any past role I have done has made anyone put a tag on me as Tonto a person, that's their problem to deal with not mine. If they say I got the role because I am on drugs, why are you calling me? Why don't you call the person who saw me fit enough to interpret the role? My damage is a movie where I interpret the role of someone who got high on drugs. Acting like a drug addict is easy. Please let them say, I am not going to respond to anyone on this issue again.

Stella: The tattoo of your face on your back was done during the movie shoot in America. Drugs and tattoo sometimes go together. Have you gone for therapy to solve this problem?

Tonto: I don't understand these questions you are asking. Have you gone to therapy for poke nosing into people's affairs? I am sure you would call it a day job. That's fine. I had my back tattooed because I always wanted to do so and during the movie shoot, we figured we could put the scene into the movie. Like you said, drug and tattoo sometimes go together and we thought it was perfect for the movie.

And Stella goes in again...LMAO!

Stella: I will ignore the insult. From the synopsis of the movie, your character did not end up well. Are you not worried that you might end up like this in real life if you continue with the drug abuse?

Tonto: Yes, the character I played ended up with HIV/AIDS and that's a good lesson for people who abuse sex and drugs without protection. The movie is a warning to young people living life on the fast lane because they can afford it. The consequences are very serious and in most cases, the damage done cannot be undone.

And Tonto has had enough

I don't mean to be rude but if someone calls me again attaching a movie role to Tonto as a person, I will not give any response and I won't be nice. It's a pity that people take their eyes off the film and begin to put question mark on the actor's personal life. People should focus on the character and not me. Thank you all the same for asking me, albeit that I find these questions totally demeaning and insulting on my person. Have a nice day.

Rita Dominic Declares: 'I Never Believed I Would Still Be Relevant In Revitalised Nollywood'

Genevieve, Joe Benjamin For 'Tango With Me' UK Premiere