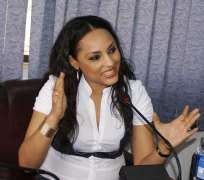 According to reports, beautiful and half-caste Nollywood actress, Lilian Bach, who has been very scarce in the play-acting world these days, has secretly tied the knot with her lover.

Since her movie premiere in mid 2011, Lilian has been off the scene in terms of making it to the headlines. Though she was at Shan George's movie premiere in May 2012, but the hype was not around especially with her public appearance after a long absence.