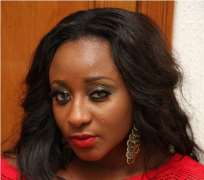 In May 2012, a popular magazine, National Enquirer exclusively reported that sexy actress, Ini Edo was pregnant. The news item, which went viral, was received with joy by teeming fans of the Nollywood diva.

This may have been as a result of tongues that have wagged after the actress married her heartthrob over three years ago without a child. So, the pregnancy news was met with joy by her fans.

But in a twist, Ini Edo took to her website to deny the news. She claimed that the story was false and that there was no iota of truth in it.

According to her post on her website then, "Heard some people want to send me on nine-month compulsory leave? Not true yet. Disregard the rumour. I will let you know when it happens.

"Meanwhile, there is something cooking I will let you know soon, lets keep our fingers crossed. Peace," she disclosed in May 2012.

Soon after she denied the story, her fans vented their anger on the media. They labelled the Nigerian press as carrying untrue stories. Some said the media do such stories in order to boost sales (print media) or increase traffic (online media).

Recall that also in May 2012, her friend and colleague, Uche Jombo denied a reported marriage story about her. She even went on Twitter to deny the story. Uche then wrote that the media were trying to force her to marry. She later told her fans not to believe everything they read in the media.

But few days later, precisely on May 16, Uche secretly married her American lover, Kenny Rodriguez. The news shocked many due to the fact that Uche had reportedly denied being getting married just few days before her marriage.

Just few weeks ago, news went viral again that Ini Edo has confirmed being pregnant. This was reportedly confirmed to a magazine, E24-7 in a interview with the paper. Though this news has also been welcomed by her fans, but some sections of the fans are angry with Ini over her initial denial of the pregnancy news two months ago.

According to an anonymous fan, "why do Nigerian celebrities like denying news stories only for them to later come out true? They lie a lot. I am beginning to dislike most of them."

Another fan told Nollywoodgists.com, "Ini Edo is such a bloody liar! Why did she deny the pregnancy news initially? Was she trying to make ridicule of the Nigerian media?"

"I am beginning to get pissed off with Ini Edo, she is a big liar. She made her fans believed the initial story was false. Is being pregnant not a good thing anymore? They can't try this with the British media. You don't insult the British or American media and go away with it that way. They would have run down your career. I think the Nigerian media need to do that to most celebs that ridicule them," another angry fan told Nollywoodgists.com.

To our esteemed forumites, what is your opinion? Do Nigerian celebrities lie?