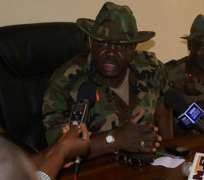 By Efosa Martins, Benin Four more Ijaw communities yesterday came under heavy military action while three hostages were freed by embattled militants along the creeks and waterways of Delta State as the day five of the security operation continued after a 24 hours break provided by the men of the Joint Military Task Force code named Operation Restore Hope for innocent indigenes of affected communities to seek refuge.

The four-ijaw communities that feel yesterday to military incursion, according to security sources, include Benikrukru, Oporoza, Daubriye, Kokodiagbene. It was gathered that about 10 gunboats carried out attacks on several communities, including Benikrukru and Oporoza, which had earlier been raided from the air. Scores of persons, including an octogenarian, were feared dead when gunboats rolled into Benikrukru community shortly before midday on Saturday. Daubriye, a tiny fishing community less than five metres from Benikrukru was used to launch the military operation in the community at about 12:05pm. It was gathered that an aged man was plunged to his death while escaping with several others from Daubriye when the shooting started.

“He was old and as we were running out, he slipped on the wooden gangway and plunged into the swamp. He died immediately, mostly from shock because he was not shot,” a source informed. Sources from Kokodiagbene Community, located opposite Benikrukru told our correspondent that the community was later set afire by the JTF, adding, “There is smoke everywhere now. “An old man, Pa Zuwegha died from the first attack and as I am talking to you now, the JTF is crossing over to Kokodiagbene, which is adjacent to Benikrukru,” the source added at about 2pm. Armed militias yesterday showed signs of panic from the intense bombardment and plea from Ijaw Leaders with the release of 14 hostages being held in the Oporoza area. The militants dropped off the foreigners at the jetty shortly after dawn and alerted the JTF of their gesture. It was gathered that the decision to return the foreigners followed plea by top Ijaw leaders as part of search for a ceasefire from the JTF. “Before the bombing started, the expatriates were taken to the jetty by the militants, who later tipped the JTF off on their gesture. But when troops came to the scene they started firing indiscriminately, may be to ensure that they would not be ambushed,” our source added. In a terse text in reply to inquiry on yesterday military operation, the Head of the Media Unit of the Joint Military Task Force, Col.Rabe Abubarkar confirmed the release of three Philipinos on Friday night and not yesterday, saying “I am not yet aware of the air attack anywhere in Delta today”. Meanwhile, hundreds of persons trapped in the creeks of Gbaramatu and other parts of Warri South West local government area of the State have appealed to the Joint Task Force to ease clampdown in the waterways in other for them to join their loved ones.

The latest development followed reports that food crisis has hit most of the riverside community dwellers, most of whom have exhausted their stock of food and other basic necessities. A middle-aged mother of six, Mrs. V. Piniki told our correspondent that she and scores others are holed up in Jones Creek for several days now since the fighting started. “As I am talking to you now, several persons like me are here, we do not have food to eat, no clothes to wear and we are exposed to rain and sunshine. The JTF is not allowing anybody to pass through, be it women children or old persons.