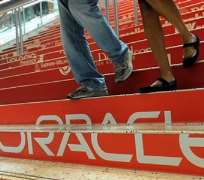 San Jose, California-based Xsigo's software helps customers save costs by allowing them to connect any server to any network.

"The acquisition is a testament to the momentum behind software-defined networking and network virtualization technology and a sense of urgency among large IT vendors to position themselves following VMware Inc's (VMW.N) acquisition of Nicira," ISI Group analyst Brian Marshall said.

VMware last week said it would acquire privately held Nicira Inc for $1.05 billion in cash to expand its portfolio and establish a leading position in virtualized networks.

Oracle did not disclose the terms of the deal.
Evercore Partners advised Xsigo Systems on the deal.