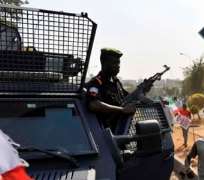 BAUCHI, July 29, (THEWILL) - Just three days after three policemen were killed by yet-unidentified gunmen along Bauchi-Gombe Road, a Police Inspector, Abdullahi Shehu Itas, was shot dead on Friday in front of his residence in Zango area, a suburb of Bauchi metropolis.

Confirming the incident to THEWILL, public relations officer (PRO) of the Bauchi State Police Command, ASP Hassan Mohammed disclosed that the late inspector was exiting the mosque after observing the Tarawih Prayer around 8pm when his assailants shot him.

“Late Inspector Abdullahi was discussing with four people in front of his house when two people came on motor cycle and approached them,” Hassan said. “When one of them greeted the two men and asked who Alhaji Abdullahi was, he answered in the affirmative. The stranger then brought out a gun and shot him; he died instantly.”

ASP Hassan said the gunmen immediately mounted their motorcycle and fled. “They did not harm or injure anybody but only targeted the late inspector,” he added.

The corpse of late Abdullahi Shehu — who was aide-de-camp to Alhaji Abdulmalik Mamoud, erstwhile deputy governor of the state during the term of Ex-governor Ahmed Mu’azu — has since been deposited at the morgue of the Abubakar Tafawa Balewa University Teaching Hospital (ATBUTH), Bauchi.