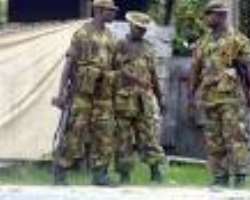 
Since 13 May 2009, thousands of villagers have been displaced and thousands more are trapped in the cross fire between the Joint Task Force (JTF), which is composed from troops of the army, navy, air force and the mobile police set up in 2004 to restore order in the Niger Delta and armed groupsin Delta State, South West Nigeria. The JTF attacks on the communities in the area, including the Okerenkoko and Oporoza communities,are continuing on a daily basis, reportedly because they believe the armed groups are hiding in the communities.

The JTF offensive began on 13 May after the JTF was reportedly attacked by armed groups in Delta State. The JTF have been conducting land and air strikes on communities across the Warri south and south-west local government areas where the Nigerian government believes the camps of the armed groups are located. Hundreds of people are feared dead.

On 15 May, using helicopters equipped with machine guns, the JTF attacked several communities of the Gbaramatu Kingdom, including Okerenkoko and Oporoza. In Oporoza, around 500 people had gathered for a yearly festival that was being celebrated in several communities of the Gbaramatu Kingdom. Exact casualty figures following the attacks are as yet unknown. According to reports received by Amnesty International, hundreds of bystanders, including women and children, are believed to have been killed and injured by the JTF, and by the armed groups, while shooting at the JTF.

The 20,000 people who live in the area of the attack are trapped there by the JTF's continuing operations. The main method of transportation for these communities is by boat; however, people attempting to travel by water are reportedly targeted by the JTF or members of the armed groups.

Thousands have fled their communities and are unable to return to their homes. Many houses in the communities have been set on fire and destroyed by the military. People are still in hiding in the forest, with no access to medical care and food.

Amnesty International is calling on the JTF and armed groups to use force only in a way that does not result in human right abuses, not to forcibly displace people, and ensure free access to those in need of medical care.


BACKGROUND INFORMATION
Poverty, corruption and the presence of oil, arms and gangs, have made the Niger Delta a very volatile region. In the past years, armed groups and criminal gangs have explicitly sought to control resources, and have engaged in acts of violence. This has lead to an increase in violent confrontations between the armed groups and the JTF.

The JTF has been frequently accused of using excessive force when attacking armed groups and gangs and often bystanders from local communities were injured and killed. In August 2008, following an attack on the JTF by armed groups, at least 4 people were killed when the military raided the village of Agge, Bayelsea State. In August 2007, the JTF intervened in a clash between two rival gangs in Port Harcourt, Rivers State, using helicopters and machine-guns and killing at least 32 gang members, members of the security forces and bystanders.