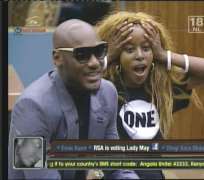 2Face was welcomed with a warm but long hug from one of the housemates, Janettes, who was overwhelmed seeing the 'African Queen' crooner in the BBA House.

2Face was then taken to the House' garden by the houssemates where they have vegetables. This was after they all welcomed him. They later talked on his music and also how they would love to have a taste of the music industry.

While responding, 2Face told the housemates that they were already Africa's celebrities. He also told them that they needed to fight poverty in the continent.

The TV show gets into day 80 today. The game is expected to last 90 days.