RAMADAN: A MUSLIM'S MONTH OF VIGILANCE AND PLANS FOR FUTURE 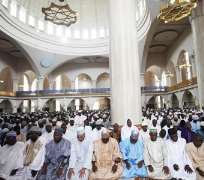 Ramadan is the month the Muslims in the whole world fast from dawn to dust. It is the best amongst all the Islamic lunar months because of the plenty of gifts and spiritual abundance it offers those who reflect and utilize it amongst the Muslims. Fasting has its significant aims and objectives which ultimately narrow down to the attainment of piety. Other attainments of the month are pity, love, tolerance, broadmindedness, forbearance, bravery and endurance.

Piety has been summed up by our blessed Caliph Aliyu Abi Talib: The Fear of the Al-Mighty; To work in accordance to the dictates of the Revealed Book (the Holy Qur’an); To be contented with the little you have; And to be ever prepared for the Day of the Journey (Death).

This obligation was not only prescribed by Allah on the Ummah of Prophet Muhammad (SAW), but on the nations before Prophet Muhammad. But probably, they observed the fast in different ways and periods.

Ramadan, is therefore, the month of Allah’s limitless mercy and abundance on the Muslim Ummah. It is the month of love and fear of Allah; the month of Taqwa (self-consciousness and self-restraint), the month of direct entry into Paradise and protection from the Hell for those who work for it and the month in which the compete divine constitution – the Holy Qur’an – was sent down by the Lord of the Worlds to guide all the creatures of the Worlds to the right path till the Day of Judgment. Too many good attributes to this month, but to crown it all, Ramadan is the only month that was mentioned in the Holy Qur’an by its name because of its unequalled blessings within its few days of mercy, forgiveness as well as total salvation and spiritual elevation.

How can a Muslim achieve all these bounties in this holy month? Simple! We should intensify our obedience to the Sovereignty of Allah and pray for Allah’s blessings on Prophet Muhammad and his household; We must establish the five compulsory prayers and intensify efforts in observing the supplementary – nafilah and tarawih; We must pay our zakat and intensify efforts in giving out sadaqat; we must fast these few days of Ramadan with faith and consciousness; and we must compete in doing good deeds, warding off evils and getting ever ready for the day we will depart this transit on earth.

If we survey properly the books of Islamic history, we will find that Ramadan was always the month of great achievements for the Muslims, the month when the Prophet or his noble companions plotted out their future personal affairs and those of the Islamic society. Of personal matters, though they were keen worshippers at all times, they intensified their relationship with Allah (SWT) to maintain it afterward. They developed the interest of fasting after Ramadan. They accepted the fact that the greatest worldly affair was just to fill the stomach. Once it was filled all times, the brain was bent to strain or stray sometimes. They looked at the future as one of the nearest things to man.

Taking Ramadan as example of an existence which soon after it is expected the end begins to approach, they believed that today must be properly utilized for tomorrow, if ever it will come. Of the society, it was the period each Muslim struggled to aid the Muslim brothers and sisters who are in need. They provided for the poor neighbours, gave out wears even before Eid, helped the youths to marry, and settled cases between the husband and wife and other related family matters. Before breaking fast, they moved from place to place looking for a faster whom they would give something to breakfast. They, by doing so, inculcated in the minds of the poor and needy the real sense of belonging to the Ummah of Prophet Muhammad (SAW) whose foundation is basically built upon cooperation for good and piety, never on evil ventures and spreading of enmity.

In Ramadan was revealed the Holy Qur’an which is the constitution – the only constitution –suitable for mankind with all its races, ethics and diversities. In Ramadan was the greatest battle like Badr between Islam and disbelief (kufr) which the Muslims with the blessings of Ramadan itself triumphed over their adversaries. There had never been an end to the conflicts between the truth and falsehood. The Truth, being so patient and focused, always prevails. And Ramadan comes as a boost to the truth.

From the good past days, Ramadan had never been conceived as instrumental to sloth and failure. Normal activities of a Muslim continue. Remembering Allah is at all times and can be done silently on the way to work places. Recitation, memorization and learning of the Holy Qur’an which are strongly recommended while fasting can be planned out and done at leisure times even in offices or work centers as long as it will not inconvenience your work mates. Doing good both by words and deeds should be the motive of a Muslim throughout his life especially during this month.

In our present society, Muslims are – Allah knows best – the most blessed people despite the foes of Islam refuse to accept it .This position bestowed on Muslims by Allah did not become from nothing. It is because of the cordial relationship between Allah – the Creator and Owner of everything in existence – and the Muslims. Despite all shortcomings on the part of the Muslims, at least Ramadan and prayers still have their impacts on the lives of the majority. It is yet regrettable that zakat is hardly given out by the deserving to the deserved.

This year, Ramadan is coming in a very critical time in the religious-political struggle of Nigeria. There is considerable tension in the country. It should be noted that Satan himself always finds man’s unawareness as time to cause confusion and deter man and humanity from any noble course. Muslims must use Ramadan to reassess their affinity with Allah, reorganize themselves and the unity of the Ummah and the entire nation. The elite must realize that the underlings among the Muslims are trust under them. The safety of their lives and meager belongings in our shaky society fully lies in their hands.

Every Muslim should strive to support the truth. Let not the pursuit of this worldly ends led by money cow our leaders from the noble course which Islam preaches and which Ramadan comes yearly to remind and accentuate. They should use this blessed month to solicit Allah’s intervention in our general problems which is basically disunity, avarice and to an extent, arrogance. Let our elite use this golden time to call for unity and focus. It is normal that we may differ in opinions, but it is not normal when we see ourselves as not brothers and sisters in Islam. It is easy to proclaim unity with free tongues, but daily occurrences unveil the reality. Every Muslim should know that until we agree to unite, our plights will remain to pull us back.

United we stand in Islam, divided we fall out of Islam. Our religion is peace and humanity. The Holy Qur’an has clearly stated that nothing can satisfy a non-believer save joining disbelief. It is thus upon a Muslim to deal with modern disbelief with extra-caution, yet with straight forwardness, simplicity while cooperation should exist among the diversity of people and religions in Nigeria.

The duty of guarding the Islamic faith, ethics and morals is not only on the elite. Every Muslim should be vigilant and hardworking. They should pray for the collective prosperity of the Ummah. The mature but unmarried should be aided. The unemployed should be strategically employed. The poor and needy should be provided for. It is really on eyesore to find most of the beggars on the streets being Muslims. Do we want to believe that other religions in this country have no poor and needy? Something should be done. Let the great souls of the wealthy in the Islamic nations, individually and collectively extend the abundance of Allah on them to arrest the situation. May Allah be with us in all and touch those might souls?

Ramadan is the month when the soul of a Muslim is connected to the heaven and man. What will be one’s gain to witness Ramadan without any change in his life? Will you read the Qur’an? Will you worship Allah sincerely? Will you develop the habit to give out from what you have? Will you conquer your heart whims and caprices? And will you pray for the safety, peace, unity and progress of our nation – Nigeria? If you have and will, you are really in Ramadan. If you have and will, then you truly know whom you are – A believer in Allah!

Ramadan is the month of vigilance. Every Muslim should look at what will benefit his brothers and sisters in Islam. Muslims should protect the interest of one another disregarding tribe and class. The Muslim minority needs to be reached and aided because there is nothing most painful than the heart being tormented by words and implications. The Muslim minority undergoes psychological torture and physical denials. The holy month comes for us to plan for our future. How do we plan?

i) Intensify da’awa programmes of tolerance and peace in the states where Muslims are in minority.

ii) Build worship places in villages even where Muslims are few. There are villages that have no mosque to pray.

iii) Arrest the poor conditions of the Muslim beggars by engaging them in creative art works which will benefit the nation in general and prevent them from going into the streets for begging. Islam surely disproves the act. But some of them are truly forced.

iv) Use this month to train the Muslim child on the ethics and morals of Islam. The Muslim child should be encouraged to start fasting from an early age so that it would have become part of the child at maturity.

v) Hold Qur’an competitions for homes, streets, areas, zones, states even individually. The Muslim minority should be encouraged to memorize too.

vi) Our noble imams should intensify the call for national unity and security as we know that the supplications of a fasting Muslim is never returned unanswered especially when they are for the general good and prosperity.

vii) Organize a yearly massive marriage (nikah) programme for the unable ones like it is done in Kano.

viii) Establish a mini “Baitul-Zakah” to regulate the zakat or donations from local and International donors.

May Allah make this Ramadan one of the best in our lives and reward all good-doing, peace-loving and Ummah-caring Muslims.