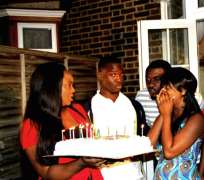 Cinema goers have passed a vote of confidence on ace director, Ruke Amata for his latest work, The Past Came Calling. This was expressed by numerous cinema goers who stormed various cinema houses across the nation to watch the movie by the versatile director.

The movie which was just premiered some days ago is already enjoying a level of cinema success as cinema goers have continued to troop to the cinemas. Many have however attributed the success of the movie at the cinemas to the reputation of the director as a director who knows his onion and only directs the best movies.

“Ruke Amata knows the art of film making like the palm of his hands, for me, I will watch the movie ten times over” a guest at the cinema revealed.

“the trailer got me interested, I saw the trailer online and I decided to give it a try. Was what another guest said when asked the reason for parting with his money to see a Nigerian movie.

The Past Came Calling tells the story of a young medical student, Susan (Marie Kumba Gomez) who comes to the UK to study with her sister, Maggie (Chioma Chukwuka-Akpotha). Prior to her travelling, she never, for any reason, believed she could fall in love with a white man. Love however plays a fast one on her as she was introduced to a good-to-marry young man, Dermot (Oliver Jolliffe) by her sister's boyfriend, Kachi (John Dumelo). They began a sizzling romantic relationship, until her past caught up with her.

Ruke Amata is a prolific producer and director, a member of the very talented Amata dynasty. He cut his teeth under distinguished dramatists like Wole Soyinka, Kole Omotosho, Femi Osofisan and a host of others. He has produced award-winning movies like Bachelors, Son of the Devil, The Accursed,Growing Up and Emotional Hazard. CHIOMA ON SET WITH COLLEAGUES