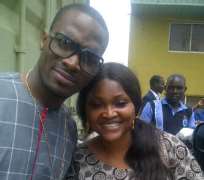 Following a warning by Pastor Wole Oladiyun of Christ Living Spring Apostolic Ministry (CLAM), Ogba, Lagos that Nigerian entertainment should pray against sudden death, the church venue was besieged by top stars who heeded to the pastor's call.

The prayer service was held yesterday, Thursday, July 12 from 10am to 12pm.

Nollywoodgists.com got from a good authority that D'Banj was present at the special prayer session held for Nigeria entertainers.

The prayer session was held at the church premises located at CLAM Event Centre, behind Tejumola Building, Omole, Lagos.

We further learnt that D'Banj was dragged to the church for the prayer session by his mother, apparently not wanting any evil befall his son, who has achieved success in his music career.

We would get pictures from the prayer sessions later.