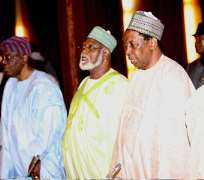 ABUJA, July 12, (THEWILL) - The National Council of State (NCS), comprising former presidents of the country, president of the Senate, speaker of the Federal House of Representatives, governors and top members of the Judiciary met again on Thursday for over three hours at the Presidential Villa to discuss a number of agenda, topped by global, transnational and internal security.

The meeting also featured the determination of the 2012 National Honours List and the review of the 1999 Constitution, on which a presentation was made by Justice Alfa Belgore, who chaired the Presidential Committee on the Review of Outstanding Constitutional Issues that submitted its report to the president on Tuesday.

Expectedly, the killings in Plateau State also attracted attention, just as the crisis in Mali and its ripple effect on terrorism in Nigeria.

The meeting, presided over by President Goodluck Jonathan, was attended by Vice President Namadi Sambo; three former heads of state, Alhaji Shehu Shagari, Chief Ernest Shonekan and Gen. Abdulsalami Abubakar; president of the Senate, David Mark; speaker of the Federal House of Representatives, Aminu Tambuwal; governors of the 36 states of the federation and the secretary to the government of the federation.