How Mother Of 4 Was Beheaded In Ekiti. 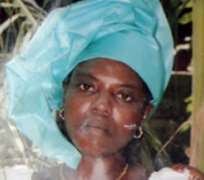 Atmosphere in Aramoko-Ekiti in Ekiti West local government, Ekiti State, was tense on Thursday morning when the news of a mother of four who was beheaded on the farm hit the streets.

Mrs. Bose Edijana Lucky was murdered on the footpath leading to the farm of her husband, Mr. NNaefenwa Lucky, both from Urhobo, Warri, Delta State around 9:3a.m on Thursday while taking food to her husband who was believed to be working on the farm.

Chief Samuel Okorefe, the chairman Urhobo Community in Aramoko-Ekiti, told newsmen at his residence at Amututu area of the town that he was contacted on phone that a serious incident had happened which forced him to come home.

He explained that the victim was said to have gone to the market in the morning to buy condiments to prepare soup and after she had cooked food, she headed for her husband's farm to take his food to him, having told her to do so, claiming that he was going to pluck some, Banga, palm fruits in the farm.

Shortly after Bose had gone to the farm, her husband was said to have come to town calling for help, informing other Urhobo natives that his wife had been beheaded by some unknown people suspected to be ritualists.

There and then, the community leader with other elders went directly to the palace of Alara of Aramoko, Oba Olu Adeyemi and reported the incident to him.

Thereafter, they informed the police and immediately a team of policemen drove to the scene of the incident and removed the remains of the victim.

The cops were shocked to discover that the head with the neck had been severed as well as her two arms, with some chunks of her buttocks sliced too.

The husband was taken to the police station when he made statement and was subsequently detained as, according to the Urhobo community leader, he was suspected to have known something about the killing of his wife due to his statement.

Chief Okorefe described the deceased as an easy-going woman loved by the Urhobos as well as the natives of Aramoko.

Bose, who was said to be about 40 years old, had four children with only the second born, Eunice, 10, as the girl.

The eldest child is Samson, 12, who is in primary five like Eunice, Aina, Kingsley, 8, is in primary 3, while the last born, Endurance, 6, is in primary one, all of them schooling at Saint John Primary School, Aramoko.

When the children were brought before newsmen, they were all crying, especially the young Endurance, probably he had understood that he would not see his Mum cuddling and pampering him anymore.

According to the Urhobo community leader, when he asked the husband about how the incident happened at the police station in Aramoko, he told him that when he waited for long and couldn't see his wife bring the food, he decided to come to town; only for him to see her lying in her own pool of blood with her head and arms missing.

Chief Okorefe, however, said he denied any complicity in the killing of his wife.

Members of the community were seen gathered at the residence of Chief Okorefe, who shared fence with Oba Adeyemi's personal residence.

He corroborated the comments of the natives who said such gruesome killing had never taken place in the town.

Oba Adeyemi, whose installation is still being challenged in court due to refusal of the former Governor, Segun Oni-led administration to respect the court injunction that ordered that installation process should be put on hold, expressed shock about the development.

“We believe the law enforcement agents would be able to unravel the perpetrators of the dastardly act. I've met with the Divisional Police Officer, DPO, and State Security Service men on the incident, but nothing concrete has been discovered.”

In her comment about the gruesome killing of Mrs. Bose Lucky, the Yeye Jumu, a high chief in Aramoko stated that such incident had never happened since she was born in the community, reasoning that the forceful installation of Oba Adeyemi could be responsible for the strange happening. She expressed fear that such horrible incident might continue to happen in the community until the rightful person chosen by Ifa oracle and the true winner of the election by the council of original kingmakers, Prince Olusegun Aderemi is installed.

Another native, Adewale Alaro also corroborated Yeye Jumu's observation, calling on the state government to expedite action on the call for stoppage of the monarch from attending the state Council of Obas and having access to the state fund.

The Spokesman to the state Police Command, Mr. Olu Victor, Assistant Superintendent of Police, disclosed that the husband of the victim said he asked his late wife to bring food to him in the farm and after some considerable time he decided to come to town when he didn't see her.

On his way, he discovered the mutilated body of his wife in the bush along the footpath to his farm and came to report the case to the police immediately.

The police image-maker explained that a team of policemen had removed the body and deposited it at the morgue in Aramoko General Hospital for autopsy.

He noted that the husband of the victim was detained because the police suspected foul play, due to the fact that he was the only one who saw the dead body of his wife.

He, however, revealed that the husband of the deceased is in the custody of the State Criminal Investigation Department, SCID, Ado-Ekiti for interrogation.