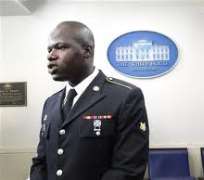 While many Nigerians back home are living with the harsh reality that some of those managing our national assets are only interested in what they can grab from the system, a young Nigeria, Oluwatosin Akinduro, made us proud in the United States on Wednesday.

We gathered that he joined a selected few US military servicemen who were awarded the American citizenship by President Barack Obama as part of activities marking the U.S Independence Day celebration.

Akinduro was sworn in as a US citizen by President Obama, in what is termed as the “naturalisation ceremony for active duty service members" and “as a mark of honour for the commitment of immigrants to America's national security".

Born in Lagos Nigeria, Akinduro graduated from a high school in Houston Texas and “joined the Army National Guard is search of new opportunities and a new challenge to lead by example”.

During the swearing in ceremony, President Obama singled Akinduro when he said: “We salute a young man from Nigeria who came here as a child...we are confident he will make a difference. We congratulate Oluwatosin Akinduro.”