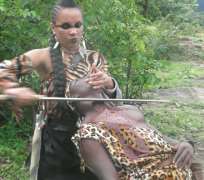 Though, the sensational 'Omo Yoruba Ni Mi O' song has once recorded his debut in a flick before, this time around, he's playing a lead role in this much-buster movie due to be released any moment from now.

The movie which has Alex Osifo and other to notch in Nollywood as star actos was shot in Northern Nigeria.

Right now, keep those fingers crossed as the movie, produced by Samaila Vangawa and directed by Geoff Galadima makes its way to cinemas near you and we get to see Kas unleash his acting skills.