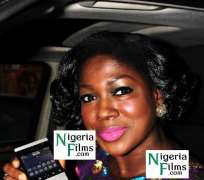 One of Nollywood's wannabes, Susan Peters has dragged herself as an aspiring public figure into spreading false rumour.

Some hours ago, the up and coming actress took to twitter to post a false story about D'Banj proposing Genevieve in the presence of Kanye West and Kim Kardashian.

This tweet has been fed upon by some online media and others who believed the story because it came from here.

A source claimed that Susan played the prank as 'April Fool' in June.

But what bothers some people is why would Susan use herself as an element of spreading a totally untrue story when she is aware of the fact that her tweets could go far in damaging the parties involved in her false rumour?

Is this another way of getting media attention she has been short of lately after her BlackBerry Porsche saga?