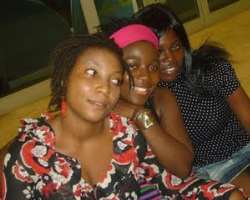 Wofor kpewo fom dokpui, wofor yio fom dokpui,
Enyeeee yi, Enyeeee yi le nyornu velia gormeeeee
(Hahahahaha …. this is certainly a tongue twister to many of you, especially you non-Anlo speaking folks. Don't worry, because as I keep telling you, it's a singular opportunity for you to learn some interesting words and expressions in Anlo, the uniquely heavy Ewe dialect)

Well, by the virtue of what they were called, it was not surprising the heated rivalry that ensued between the two women. They would quarrel, fight and refuse to talk to each other for days. Often times, the lucky, perhaps unlucky man looked on while his wives went on with their little farrago. He would only intervene when things seemed to be getting out of hand, for instance when one woman threatened to injure the other or when the harm was already done.

The second and younger wife, Ayador in particular was very quarrelsome and bitter. As much as Ablavi tried to make peace with her, Ayador only pushed her farther away with insults.

“You evil, haggard looking woman, to hell with you. Who do you think you are for me to be willing to resolve issues with you? You only continue to grow older and more ugly every minute, you and your miserable children.” Ayador would say, any time Ablavi tried to resolve any issues with her.

Little did Ayador know that, as the faithful hands of the clock kept ticking, second by second, so her days went by with her dazzling beauty fading away also. She thought she would always remain young and fresh.

One day though, they went to the farm together – husband, wives and children to cultivate some maize on a piece of land that they have tilled together, virtually without Ayador …. She often complained of or feigned one sickness or the other that kept her away from working together with the others on the farm. Lazy she! Being the more sober and wiser woman, Ablavi never complained of Ayador's endless excuses that exempted her from working on the farm. She would rather work her lungs out than picking a fight with Ayador.

Unknown to the rest of the family, anytime Ayador complained of one ailment or the other which sometimes enabled her to be given some time to be alone, relaxing while the others worked, Ayador always sneaked to steal the food that the family brought with them to the farm. She would eat everything or throw away whatever she couldn't finish, just to make the rest of the family, especially her rival and her children suffer from hunger. The family often went through the trauma of discovering that their food was gone. You can imagine the ordeal and frustration when they came to empty bowls and plates after retiring from a hard day's work under a hot scotching sun. They often attributed the misfortune to a strange wicked animal that came for their food while they worked.

Ayador, on the other hand, while the others, including her husband agonized about their loss and hunger, was filled with joy. She was satisfied that the others were suffering because of her greed and selfishness. She said to her herself …. Efiawo! Efiawo! Efiawo! (A sarcastic expression that means …. You've learned your lesson/You deserve it!) This, she said with such emphasis, her forehead was wildly knitted and pleated if you saw her say it!

This happened on a number of occasions when the family retired to empty bowls staring hard back at them. The poor folks even attributed the issue to an evil spirit who came for their food because they took a number of measures that they believed could keep their food safe when they retired to eat. But Ayador also intensified and improved her schemes to get the food.

On one other occasion, Ayador, just after a few minutes work on the farm, as usual, came up with another excuse to allow her do what she enjoyed doing most ….. causing pain and frustration to the rest of the family, especially Ablavi.

“I feel very horrible in my stomach. I think I must visit the toilet” Ayador announced to the others (any open space in the bushes a little away from the others, did for a toilet). So she went into the bushes, sneaked to where the food was securely kept from the “evil spirit”. After helping herself with all the food, she decided to go a step further in her little adventure.

After her meals, she squatted on the pot, eased herself so hard to produce the most beautiful laying concrete that one has ever seen. Then she attempted to get up with the intention of covering her newly prepared dish for the family. She tried and tried to get the pot off her butts, but the pot would not move. She hit the pot with anything that she could lay her hands on with all her strength and might. But the pot wouldn't move. Today, her cup was really fool and perhaps the pot decided to tell Ayador, “efiawo ha” (You've learned your lessons too). Reading the time, she knew her husband and rival would soon be out to eat their food and start looking for her. She hurried to a nearby bush to hide.

Consequently, the family returned and once again saw that their food was gone but this time with the pot as well. They started calling out for Ayador to ask her if she knew what had happened to the food and the pot. She held her breath from her hide-out to prevent the rest from seeing her. Then, all of a sudden, a song was heard from a distance ……

That was the mystery pot tightly clung to Ayador's butts, telling the folks that she was under Ayador's buttocks. With a loud cry, the pot went on to explain that Ayador, had tried to get her off, but she wouldn't. They couldn't believe it. A pot singing?!

Ayador was eventually caught and it had to take a hot burning metal to take the pot off her buttocks. With much pain and embarrassment, she confessed to the family how she often sneaked out to steal their food, just to punish them and make them suffer. She asked for Ablavi's forgiveness and promised never to be wicked and greedy again.

This tale, any time I remember it, still sends shivers down my spine. I remember how I coiled around my grandma as she told us this tale under the moonlit in our compound. For days, I couldn't go alone to our electricity-less room when I was sent in the night. I was scared of lifeless objects singing to me in the dark. I was scared because of the little, little evil that I knew I was guilty of. This tale has made me a kinder person. It has taught me never to treat people with wickedness and malice.

Grandma, I'll never forget this tale. I miss the moonlit and the stars that we tried to count. We never succeeded because they were so many. Maybe, the tales you told me and the lessons are equally countless!

I leave you to deduce your own lessons from this tale.