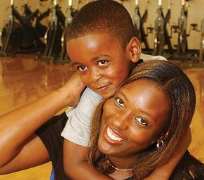 I need some advice from a guy's point of view, I recently broke up with my boyfriend of 9 years. We have 3 children together, my ex wants me to let our 2 sons live with him which in itself is no problem and I am happy that he still wants to be apart of their lives, my issue is he wants to also move this girl in that he met on the internet and they have only known each other for a short time. I told him that if he wants to live with her that is fine but our sons will stay with me because I don't know her and I don't trust her. I had a bad experience with my step-father so I am very protective about who I let around my children. He stated that I should trust him enough to know that he would never put our kids in harm's way but I feel that he is moving to fast and I don't want the kids in the middle of a whirlwind romance. Am I being unreasonable and overprotective?