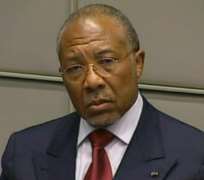 The sentenced was carried out today, Wednesday, May 30 after Charles Taylor was found guilty of war crimes he committed while in power.

The trial chamber unanimously found Charles guilty of all charges brought against him. He becomes the first former head of state to be sentenced by a world court after the Nazi trials in 1946 at Nuremberg.

Charles Taylor was found guilty of an-11 counts charges involving crimes against humanity for aiding and abetting Sierra Leone's Revolutionary United Front (RUF) rebels and their allies during the war, in which 120,000 lives were lost.

He was also found guilty of dealings in diamond sales which was done in exchange for arms and ammunitions used during the war.

He sought an asylum in Nigeria during the Obasanjo regime few years ago.