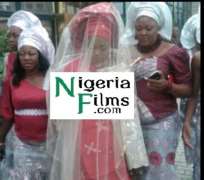 The wedding of top Nigerian actress, Khadijat Funke Almaroof Oloyede formerly known as Funke Akindele may have been concluded but it would for a long time remain in the memory of many.

With some people and media still in shock at the sudden change of venue, more reactions have cropped up.

Since the controversies arose due to her choice of love, the actress has kept mum on the issue. Her twitter account, which Funke has always made use of was silent, especially on the wedding controversies.

Her marriage to an Alhaji, while she is reported to be a 'born again' christian was part of the many controversies. This was further heated up when some got to know that she and her mother are devoted members of Pastor D.K Olukoya's MFM church.

Also was the controversy of her settling down as a second wife of Almaroof; her husband.

At the early hours of today, May 27, Funke opened up to a fan of hers. One of her twitter followers asked, "my sister, Funke Akindele, hope you are still in CHRIST?"

Funke then responded, "always in Christ!! He's my strength and shield. Thanks."

In an appreciation to the support she got from people, the Ikorodu, Lagos-born actress tweeted, thanks a lot for the lovely wishes! God bless you all. Sulia Kan! Tweethearts Kan!! (One Sulia, One Tweethearts)

Funke Akindele finally completed her wedding rites to Almaroof yesterday at The Haven Event Centre, Ikeja after it was moved from All Season Plaza, Ikeja, Lagos.