Poverty pushed me into DRUG peddling 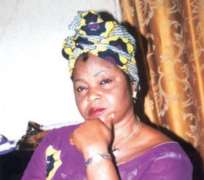 Taiwo Akinwande, popularly known as Yetunde Wunmi, is one of the most notable actresses in the Yoruba movie industry.

She joined the acting world in 1981 as an apprentice under Sunday Akinola (Mogaji Feyikogbon) but later left in 1989 to team up with the Tate Alade Aromire. The light-complexioned actress has appeared in so many movies that she has even lost count of them.

In this interview with BAYO ADEOYE, the actress who was arrested, prosecuted and convicted for drug peddling, spoke about the challenges she faced on her journey to stardom, her views about the Nigerian movie industry and her ordeal in detention when she was arrested and jailed for possession of hard drugs at the Lagos Airport.

AT what point did you grow passion for acting?

I'd been thinking about acting since 1974. Then, the late Ade Love brought a film titled 'Ija Ominira' to Danjuma Films in Agege. The place was close to where I livedthen in Lagos. Since that day, I had always wantedto act. Around that time, one could hardly find any artiste; before you could get one, you would sweat. To cut the story short, I had the chance at Feyikogbon s place to join the train of actors as few as they were back in those days.

What was responsible for the scarcity of actors then?

It was because it was something people didn't really see as anything. People would rather go into small businesses than laze around acting. In fact, as a young man or woman, you wouldn't even consider it because you could hardly find anyone doing it. So, if you were to do it, it would be a very tough decision.

Who were your role models while growing up as an actress in those days?

As I said earlier, there was hardly any artiste around me then. But we still had the likes of the wife of Baba Ogunde, wife of Ade Love, wives of Isola Ogunsola (I Show Pepper), like Efunsetan, Mama Alakara and others and Fausat Balogun. I respect these people a lot, I enjoyed what they were doing. I also watched Fally Werepe on television with keen interest.

What were the challenges you went through when you wanted to join the industry?

I really went through a lot because after I saw the late Ade Love for the first time then, I didn't get to lay my eyes on him again. I later met Jacob, Pappy Luwe and Aderupoko at a party.

That very day, I cornered them up and I actually got their cards. They gave me an appointment to meet them at Mayflower Hotel in Mushin. I can still recall the date. It was 1st of July, 1980.1 was told to come around 4pm. Unfortunately, I got there some minutes to five. When I asked about their whereabouts, I was informed they had just left.

And somebody told me to check them somewhere around Bornu Way, Ebute Metta* but when I got there, I only met the wife of their friend who told me that they were yet to be at the place on that very day. She directed me to Segun Adewale's office on Apapa road, because she believed that they would always go there. All these happened the same day.

I went there again, but I was also told that they are yet to be around, but the person assured me that they would definitely get there if they were in Lagos. They later directed me again to Adebowale at Fadeyi. The same story surfaced that they were yet to be there and that if they came to Lagos, they would come around.

I was equally told to wait for some time. I waited till around half past six in the evening. I only left when they were about to close for that day. I was drenched with heavy rain that fell that night and I trekked from Ikeja to Iyana-Ipaj a after that fruitless effort.

I continued my search for them the following day; I checked the card that they gave me which had an Ibadan address on it. I later headed for Ibadan to try my luck again. When I got to the place on the address, I saw an old woman eating rice and told her of my visit to see Aderupoko and Pappy Luwe.

She dropped the plate in her hand and told me that they just left and she showed me the route they took. I We spent three months at the movie location for 'Agbo Meji' that I spoke about earlier. For those three months, I was paid N200. In the end, the film didn t see the light of day due to some reasons I won'tmention.

Okay, how do you connect with your scripts and deliver so well in interpreting the roles?

When I'm given a script, a week or a month to when the movie is to be shot, I will start mastering it and trying to become the character so that it will happen naturally on set. It's very simple because I've been doing it over the years, so it's not a big deal.

Could you still recall the films you did that snook the industry?

Films like, 'Aromire', Omije' and 'Inu Kan'. The latter gave me so much fame. It was in the film that I bore Wunmi that's still my stage name till today. 'Omije' was also very popular around that time. I also did 'Asin nla', a film by Uncle Jide Kosoko. I've done a whole lot of movies after all that which I can't even remember at this moment.

What's your take on the present state of the industry?

The only thing I can say is that it should be better than what it is now. Because before, it wasn't as good as this; now we are thanking God that it's getting better. I pray that may God continue to make itbetter.

How do you manage your family and your acting profession?

I'm managing very well. I thank God that my children are grown ups and they are on their own. When they were still young during that time I told you earlier, I had a junior who was staying with me then and assisted in looking after them for me. Whenever I was away then, I would drop money for them to eat and equally bought food stuffs at home for them. Then, I could leave for two or three months before returning. I thank God that He gave me only two and I was able to take good care of them.

So, how about your husband?

My husband is alive but we are no longer together.

What happened? It seems that most actresses don't keep their marriages

It's this job. I love this job more than my husband.

And you sacrificed your husband for this job?

Yes, because I so much love this job.

When you married him, was he not aware of what you were doing for a living?

I'd married my husband before I took up acting as profession. In fact, I'd given birth.

You children were born to your estranged husband; so why did you have to leave?

It was when he didn't like this job and I liked it. It was what I could regard asf conflict of interest.

So, you couldn't drop this job to save your marriage?

No, I can't drop it for any man. Never! In fact, never ever! Except when God calls me home; that's when I can be[ done. As long as I'm still alive withouti any ailment, V11 keep going.

So, you are not even thinking of quitting at a certain age?

No, I^n not thinking about that at all. I'm not engaged in any other job.

Could you recall your own movies you've produced?

They are numerous. I did 'Odun Mejo' and Salawa Abeni played the major role in that movie. I did 'Opa Ajobi, 'Ade Ori', 'Omo Okunrin', 'Jawonlaya', 'Oro Omo Le', 'Aje Niyonu', 'Egbogi Oloro', 'Ori OIowo L'ori Mi' and so many others.

Are you a dynamic actress or a stereotype, who is always suited to just the same type of role every time?

I can play different kinds of roles. There is nothing an artist should not be capable of doing; I can play any role.

After your brush with the law for being in possession of cocaine, how did you pick up your life from there?

Muslims believe that if anything happens to them, it's only mere trial. May God not allow us to get into a trial that we won't end. So, it's only a trial for me and God just tested my faith. Even when God wants to test a Christian, He will give him a little problem and if the problem should go ahead and bring him down, that's where he will end his life. But if such a problem should arise and the person who is with it believes God brought it, he can pray that God should lift it without looking here and there; and I believe that God will put an end to the problem and that particular person will stand on his feet once again.

What were you thinking then; was it a plot by someone?

No, I didn't see it as a plot by anyone. I just saw that while I was in detention, I was thanking God that He kept me for a certain purpose because I didn't know what happened. Who knows maybe if I were to be out there, I would have died. So, I kept thanking God and I couldn't even think anybody was looking at me. I thank God because I snouted onto God and He answered me. It is God that called me to this job and not any human being.

While in detention what was actually going through your mind. Did you ever think that you would come out or be j ailed?

I was only praying to almighty Allah to forgive me and protect me through the ordeal and He did.

What really pushed you into that act?

Maybe I allowed my love for money to get too much over me. I was actually very broke at that time. Then? I could not boast of N10,000 in my savmgs. It was that bad. It was actually a temptation. And I thank God for His mercy.

Didn't you face stigmatization and dejection even from your colleagues when you returned?

No, not at all. They were very supportive. Alhamdulilahi, they stood by me.