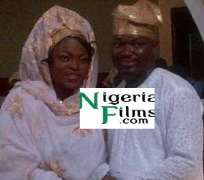 Reports just reaching Nollywoodgists.com has it that Funke Akindele has secretly wedded his fiance, Kehinde Almaroof today, Thursday, May 24.

The wedding was held in high level of secrecy due to fans' outburst on Funke over her choice to be a second wife of Almaroof.

Since the announcement of her Saturday, May 26 planned marriage to Almaroof, who already has a wife with four kids, she has been under hot criticism.

There were reports this week that Funke burst into tears after controversies about her planned marriage to Almaroof, who is an Alhaji, were becoming overwhelming to her.

We learnt that she had to play a fast one on fans and journalist who had put their mind in the publicised May 26 initial wedding date.