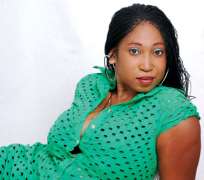 Gist getting to Nollywoodgists.com from a reliable industry source reveals that one Nollywood actress, Titi Osinowo may land in a serious trouble if things are not well treated by her.

According to the gist, Titi, who acted in the popular Nigerian TV series, Family Ties season 2, is presently receiving some threats from her estranged boyfriend.

A bird in the know close to the actress told Nollywoodgists.co that trouble started for Titi on Saturday, May 19 when both Titi and her boyfriend identified as Dare Olufade popularly known as D Plus had a hot misunderstanding over some unclear issues.

We learnt that her the misunderstanding almost resulted into a physical assault between the two lover.

We were told that by the source that Dare allegedly became violent to the actress when she (Titi) insisted that she was no more interested in the relationship due to some alleged infidelity accusations on Dare.

As a result, Titi was said to order Dare, who we also learnt was a former dancer for P-Square, to pick up his belongings in the actress's Surulere, Lagos home at about some minutes past 10pm.

Not convinced enough, the police reportedly told Dare to take them to his girlfriend's place for identification. We were told that Titi confirmed that he knew him but declined to allow him pass the night in her place afterwards when it was too late for him to go back home that night.

This we learnt angered the bitter boyfriend, who allegedly threatened to deal with Titi for allowing him sleep outside that night and not allowing him pass the night with her when she knew it was too late to go back home because of the delay from the police.

The source further told us that Titi has reported the case to a police station at Bode Thomas, Surulere, Lagos.

Information gathered shows that Dare works as an event manager and was once in a dancing group called Steppers while in Unilag as a student.

Do you call this love gone sour?